Previously published in paperback as October Sky. Three years in the life of Homer 'Sonny' Hickam, from the moment he sees the Sputnik satellite overhead in West Virginia to his successful launch of a prizewinning rocket. In 1957, Coalwood, West Virginia, was a town the post-war boom never quite reached, and dominated by the black steel towers of the mine. For fourteen-year-old Homer 'Sonny' Hickam there are only two routes in life: a college football scholarship, or a life underground. But from the moment the town turns out to watch the world's first space satellite, Sputnik, as it passes overhead, Sonny and his friends embark on a mission of their own - to form the Big Creek Missile Agency, and build a rocket. Looking back after a distinguished career as a NASA engineer, Homer Hickam tells the warm, vivid story of youth and ambition that inspired the 1999 film October Sky. It is the tale of a group of teenage boys who dared to imagine a life beyond the confines of the coal pit, and went on to design, build and launch the rockets that would change their lives, and their town, forever. 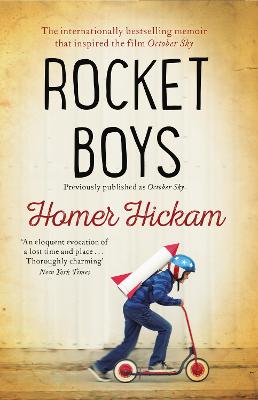 Unusually for 50s' West Viriginia, all the Rocket Boys went to college and on to professional careers. Homer Hickam, 21 years after the BCMA fired its final rocket, joined NASA as an engineer at the Marshall Space Flights Centre from which he retired in 1997.