THE SUN'S Ebook of the Week April 2013The moment love-phobic American expat Marla Jacobs discovers that the shop next to her Little White Wedding Chapel is to become a funeral parlour, she declares all-out war.Marla's chapel in the sleepy Shropshire countryside has become a nation-wide sensation, but the arrival of Funeral Director Gabriel Ryan threatens everything Marla has worked for. She can picture the scene: wedding limos fighting for space in the street with hearses; brides bumping into widows; bouquets being swapped for wreathsMarla's not going down without a fight. She enlists a motley crew of weird and wonderful local supporters, and the battle lines are drawn. But, as soon as Marla meets her nemesis, she realises just how much trouble she's really in. His gypsy curls and Irish lilt make her stomach fizz - how is she supposed to concentrate on destroying him, when half the time she's struggling not to rip the shirt off his back?Funny, romantic, and dangerously sexy, UNDERTAKING LOVE is a delightful debut from an exciting new voice in Women's fiction. 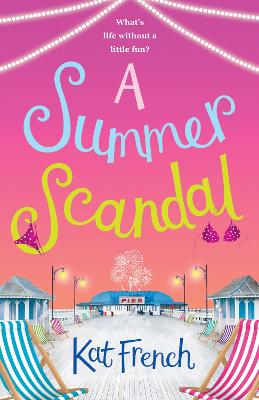 View All Books By Kat French