FROM THE #1 BESTSELLING AUTHOR `Deadly conspiracies, bone-crunching action and a tormented hero with a heart . . . packs a real punch' Andy McDermott A LOST MANUSCRIPT. A SAVAGE MURDER. A DEADLY SECRET. While on a business trip to the UK, Ben Hope makes an impulse decision to attend a college reunion at his former university, Oxford. There he meets an old friend, Nick, now an internationally-renowned classical musician. But storm clouds are soon once again brewing on Ben's horizon. After Nick's brutal murder in an apparent home invasion robbery, Ben is drawn into the mystery of a missing music manuscript that may be a lost work by the legendary composer Johann Sebastian Bach. The hunt for his friend's killers leads Ben across Europe, and into bloody conflict with even more dangerous people than he'd bargained for. As his quest unfolds, so does the shocking truth about the lost Bach manuscript, a secret dating back to the very darkest historical chapter of Man's inhumanity to Man. The Ben Hope series is a must-read for fans of Dan Brown, Lee Child and Mark Dawson. Join the millions of readers who get breathless with anticipation when the countdown to a new Ben Hope thriller begins... Whilst the Ben Hope thrillers can be read in any order, this is the sixteenth book in the series.

Praise for Scott Mariani: `Deadly conspiracies, bone-crunching action and a tormented hero with a heart . . . Scott Mariani packs a real punch' Andy McDermott `James Bond meets Jason Bourne meets The Da Vinci Code' J. L. Carrell `If you like your conspiracies twisty, your action bone-jarring, and your heroes impossibly dashing, then look no farther - the Ben Hope series is exactly what you need' Mark Dawson `Fans of Dan Brown will love this thrilling adventure' Closer 'Non-stop action - this book delivers' Steve Berry `If you've got a pulse, you'll love Scott Mariani; if you haven't, then maybe you crossed Ben Hope' Simon Toyne `Full of authentic detail and heart-stopping action - a real thrill ride' Ed Macy `Establishes Scott Mariani as an author to watch' M. J. Rose `Packed with dark intrigue, danger around every corner, bullets flying, sexual tension, and an endless assault of nasty villains . . . everything a thriller should be and more' Joe Moore `Scott Mariani is an awesome writer' Chris Kuzneski

Scott Mariani is the author of the worldwide-acclaimed action / adventure series featuring maverick ex-SAS hero Ben Hope. Scott's books have topped the bestseller charts in his native Britain, with The Alchemist's Secret, the first Ben Hope novel, having held the #1 Kindle position for a record-breaking six straight weeks. The Ben Hope series is translated into over twenty languages worldwide. Scott was born in Scotland, studied in Oxford and now lives and writes in rural west Wales. 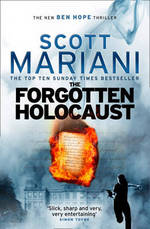