My Kennedy Years A Memoir

My Kennedy Years A Memoir Synopsis

Fifty years after his assassination on 22 November 1963, John F. Kennedy is still a towering figure in the history of our times and across the world. Jacques Lowe was the official photographer of JFK's campaign for the presidency as well as his personal photographer following his election in 1960. Over 250 images capture life with this compelling politician on the campaign trail, at home with Jackie and daughter Caroline, politicking behind the scenes at the convention, at work in the White House, as a leader on the world stage, and his funeral at Arlington National Cemetery, mourned by millions around the world. Throughout, the photographs are complemented by Lowe's personal record of his friendship with the whole Kennedy family and his years at the heart of American politics. They provide a unique record of one of the most enduringly fascinating politicians of the modern era. 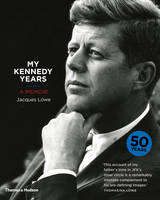 Jacques Lowe (1930—2001) was born in Germany, and after a wartime childhood spent in hiding because of his mother’s Russian Jewish origins, emigrated to the United States. As a photojournalist working for the leading magazines of the period, he met Robert F. Kennedy in 1956 and two years later was introduced to the future President. He became the official photographer of John F. Kennedy’s campaign for the presidency and was subsequently personal photographer to the President. After Jack Kennedy’s death and the assassinations of Martin Luther King and Bobby Kennedy five years later, Lowe returned ...