A tale of corruption with an ending you really can’t guess; it’s mesmerising stuff. The story starts slowly but then becomes faster and faster, real edge-of-the-seat stuff. As it builds through unexpected turns, the characters gain depth and a fantastic thriller ensues. Lots of action, moral issues, the effect of guilt (or the lack of it) and small town frustrations (Maine) make up one of the best first novels we’ve read. This was first published in 2004 and it won the Crime Writers’ Association John Creasey award for best first crime novel and has been, quite rightly, republished. A must-read.

Click here to read the Reader Reviews of Defending Jacob by William Landay.

In a small town in Maine, nothing much happens. Even the Chief of Police, Ben Truman, is thinking about leaving. That is, until he discovers a body in a cabin up by the lake. The dead man turns out to be a Boston prosecutor who had been investigating a series of gang-related murders. When Truman heads to the city to follow the few leads he has on the case, he is not welcomed by the local police - after all, big city crime is not something he has had any experience with. But Truman refuses to let go of the case. With the help of a retired cop, he becomes embroiled in an investigation which reaches back to a killing 20 years ago...

'A most assured debut, cleverly plotted with an unguessable ending' SUNDAY TELEGRAPH

'Compelling...marks the blooding of a major new talent, with shades of Scott Turow' GUARDIAN

'An impressive and constantly surprising debut...the main plot twist knocks you sideways and there's more to come. A marvellous, unexpected novel' TIME OUT

William Landay was an assistant district attorney before he turned to writing. He is the author of two previous novels, Mission Flats and The Strangler. He lives in Boston with his family. 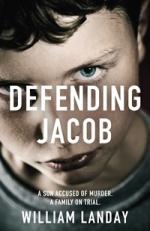 View All Books By William Landay