LoveReading View on The Tiger's Wife

THE ORANGE PRIZE WINNING DEBUT FROM A TRULY EXTRAORDINARY TALENT.

A Special Edition of The Tiger's Wife by Tea Obreht to celebrate Orion's 20th anniversary.

A tiger escapes from a zoo during a Nazi bombing raid on a village in the balkans in 1941. His nocturnal visits hold the inhabitants of a local village in a terrified thrall. But for one boy, the tiger is a thing of magic. This is the beginning of a story about that boy's granddaughter, now a Doctor. She receives word of her beloved grandfather's death in circumstances shrouded in mystery. She realises he may have died searching for 'the deathless man', a vagabond who was said to be immortal. Struggling to understand why a man of science would undertake such a quest, she stumbles upon a clue that will lead her to the extraordinary story of the tiger's wife.

'Having sifted through everything I have heard about the tiger and his wife, I can tell you that this much is fact: in April of 1941, without declaration or warning, the German bombs started falling over the city and did not stop for three days. The tiger did not know that they were bombs...' A tiger escapes from the local zoo, padding through the ruined streets and onwards, to a ridge above the Balkan village of Galina. His nocturnal visits hold the villagers in a terrified thrall. But for one boy, the tiger is a thing of magic - Shere Khan awoken from the pages of The Jungle Book. Natalia is the granddaughter of that boy. Now a doctor, she is visiting orphanages after another war has devastated the Balkans. On this journey, she receives word of her beloved grandfather's death, far from their home, in circumstances shrouded in mystery. From fragments of stories her grandfather told her as a child, Natalia realises he may have died searching for 'the deathless man', a vagabond who was said to be immortal. Struggling to understand why a man of science would undertake such a quest, she stumbles upon a clue that will lead her to a tattered copy of The Jungle Book, and then to the extraordinary story of the tiger's wife. 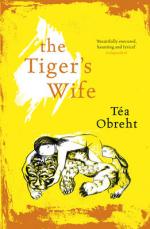 Tea Obreht was born in 1985 in the former Yugoslavia, emigrating to the US in 1997. She was the youngest author on The New Yorker's Top 20 Writers under 40 List, and one of the youngest authors ever to be extracted in the magazine. Her short story, 'The Laugh', debuted in The Atlantic Fiction Issue and was then chosen for The Best American Short Stories 2010, while her short story, 'The Sentry' appeared in the Guardian Summer Fiction Issue alongside stories by Hilary Mantel and David Mitchell. She lives in New York.

View All Books By Tea Obreht