LoveReading View on The Book of Books : The Radical Impact of the King James Bible 1611-2011

Melvyn Bragg places the Bible in context, giving us the background, the battle between Latin and “coarse” English, the story of the men who battled to translate the bible for everyman and the final development into the King James Bible. Once made its influence too is tracked, through war, religious divide and personal freedoms. As Melvyn Bragg says, you may be religious, of another religion or none, but undeniably this story of the making of the King James Bible and its influence is a history well-worth reading.

Like for Like Reading
Begat: The King James Bible and the English Language, David Crysta
Bibles: An Illustrated History from Papyrus to Print, Christopher De Hamel

The Book of Books : The Radical Impact of the King James Bible 1611-2011 Synopsis

The King James Bible has often been called the Book of Books both in itself and in what it stands for. Since its publication in 1611 it has been the best selling book in the world, and many believe, had the greatest impact. The King James Bible has spread the Protestant faith. It has also been the greatest influence on the enrichment of the English language and its literature. It has been the Bible of wars from the British Civil War in the seventeenth century to the American Civil War two centuries later and it has been carried into battle in innumerable conflicts since then. Its influence on social movements -- particularly involving women in the nineteenth and twentieth centuries - and politics was profound. It was crucial to the growth of democracy. It was integral to the abolition of slavery and it defined attitudes to modern science, education and sex.

The Book of Books : The Radical Impact of the King James Bible 1611-2011 Press Reviews

'Bragg's strengths as a novelist yield an account that is personal and imaginative, full of excitement and energy...I have never read an account of the Bible quite so compelling'. - David Crystal, The New Statesman

'What gives this book its particular power, beyond Bragg's own reputation as a broadcaster, novelist and one of our foremost public intellectuals, is that he separates the importance of the King James Bible from the role of Christianity itself. Bragg tells the history of the King James with the vigour and pace of a storyteller rather than the dry precision of an academic.' Independent

'I am inclined to accept his final word: that the KJB's impact has been immeasurable and it is not over yet .' John Cornwell, Financial Times

'Bragg takes a well known tale and tells it with easy eloquence'. - Scotland on Sunday

'As popular history, this is great stuff.' - Scotsman

'Bragg's tribute is of value because he has an aptitude for storytelling. He is breezily readable where other studies can feel dense and recondite. His turn of phrase is dramatic. Bragg's prose reverberates with scriptural certainty. Mostly this is an affectionate book.'
Henry Hitchings, Observer

Melvyn Bragg is a writer and broadcaster. His novels include The Hired Man, for which he won the Time/Life Silver Pen Award, Without a City Wall, winner of the John Llewellyn Rhys Prize, The Soldier's Return, winner of the WHSmith Literary Award, A Son of War and Crossing the Lines, both of which were longlisted for the Man Booker Prize, A Place in England, which was longlisted for the Lost Man Booker Prize, and most recently Grace and Mary. He has also written several works of non-fiction, the most recent being The Book of Books about the King James ... 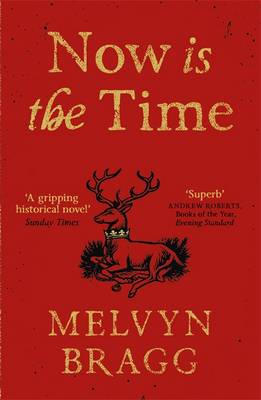 View All Books By Melvyn Bragg