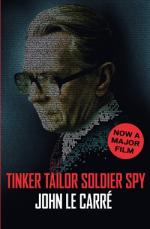 Click the screen below to view a trailer for the film version of Tinker Tailor Soldier Spy staring Gary Oldman and Colin Firth. DVD is due for release 30 Jan 2012.

The enduring novel by one of our greatest storytellers. George Smiley, who is a troubled man of infinite compassion, is also a single-mindedly ruthless adversary as a spy.

The scene which he enters is a Cold War landscape of moles and lamplighters, scalp-hunters and pavement artists, where men are turned, burned or bought for stock. Smiley's mission is to catch a Moscow Centre mole burrowed thirty years deep into the Circus itself.

'A great thriller, the best le Carre has written'
Spectator

'John le Carre is the great master of the spy story ... the constant flow of emotion lifts him above most novelists now practising.'
Financial Times

John le Carré was born in 1931 and attended the universities of Bern and Oxford. He taught at Eton and served briefly in British Intelligence during the Cold War. For the last fifty years he has lived by his pen. He divides his time between London and Cornwall. His works include The Spy Who Came in from the Cold; Tinker, Tailor, Soldier, Spy; Smiley's People; The Little Drummer Girl; A Perfect Spy; The Russia House; and Absolute Friends.

More About John le Carré
Add To Wishlist
Buy from our bookstore and 25% of the cover price will be given to a school of your choice to buy more books.

Chronicles of the Secret Service