Longlisted for the William Hill Sports Book of the Year Award 2010.

Vicar’s son Arthur Newton became a long-distance running legend by accident. Aged 38, he found himself embroiled in a land dispute with the South African government. To attract publicity for his cause, he ran the Comrades Marathon, a newly launched 54-mile footrace.

This ageing novice did not just finish, he actually won. It sparked the longest ‘protest march’ in history, for the pipe-smoking Englishman took up distance running full-time. He covered 100,000 miles (the equivalent of four times round the Earth) and set world-best times over various distances.

Although the South African government refused to budge, Newton carved a niche among the great figures of world athletics. Finally quitting aged 51, Newton turned to coaching and retired to the London suburbs. His house became a magnet for distance runners the world over. Champions and novices arrived to meet the author of acclaimed books and articles. They enjoyed endless supplies of tea, cake and advice.

As every distance runner worth his salt knew, ‘Tea with Mr Newton’ was an essential part of any training schedule. 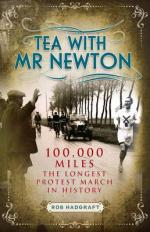 Rob Hadgraft became interested in running after he and a group of fellow newspaper sub-editors ran a 26-mile private marathon across rural Suffolk, to raise funds for a local cause.   That was nearly 30 years ago. Hadgraft is now approaching 800 races on road, country and track. Born in 1955 and based in Essex, he rarely troubles the elite performers near the front of the pack these days.This is Hadgraft’s fourth athletics history, following acclaimed biographies of Alf Shrubb, Walter George and ‘Deerfoot’. He has also had eight football titles published by Desert Island Books.

View All Books By Rob Hadgraft