LoveReading View on Hitch 22: A Memoir

Shortlisted for the Galaxy Biography/Autobiography of the Year Award 2011.

A memoir from one of Britain’s foremost intellectual commentators of the past 40 years. There are an abundance of experiences and exploits for Hitchens to draw on in this totally fascinating and compelling memoir.

Over the last thirty years, Christopher Hitchens has established himself as one of the world's most influential public intellectuals. His originality, bravery, range, and wit made him first a leading iconoclast of the political left and then, later in his career, a formidable advocate of secular liberalism. When the Twin Towers were attacked in September 2001, Hitchens was re-energised again, quickly emerging as one of the fiercest and most influential advocates of war on Iraq. In this long-awaited and candid memoir, Hitchens re-traces the footsteps of his life to date, from his childhood in Portsmouth, with his adoring, tragic mother and reserved Naval officer father; to his life in Washington DC, the base from which from he would launch fierce attacks on tyranny of all kinds. Along the way, he recalls the girls, boys and booze; the friendships and the feuds; the grand struggles and lost causes; and, the mistakes and misgivings that have characterised his life. Hitch-22 is, by turns, moving and funny, charming and infuriating, enraging and inspiring. It is an indispensable companion to the life and thought of our pre-eminent political writer.

For the past thirty years, Christopher Hitchens has been everywhere, it seems, certainly in terms of journalism. A recent piece in a Sunday newspaper, however, announced the fact that he has terminal cancer, so he won’t be with us much longer. What a good thing, then, that he has had the wit to have already published his memoirs, telling the story of his life from his childhood in Portsmouth to his life in Washington DC. This is a candid memoir that doesn’t skimp on the mistakes and lost causes, or the outrage he has regularly caused – think Mother Teresa, for instance – but its vigour and wit show us why this enfant terrible of letters will be sorely missed.

'If Hitchens didn't exist, we wouldn't be able to invent him.' Ian McEwan

'One of the most formidable polemicists writing in English today.' John Cornwell, The Tablet

'If you are... invited to debate with Christopher Hitchens, decline. His witty repartee, his ready-access store of historical quotations, his bookish eloquence, his effortless flow of well-formed words... would threaten your arguments even if you had good ones to deploy.' Richard Dawkins, TLS

Christopher Hitchens was a contributing editor to Vanity Fair and Visiting Professor in liberal studies at the New School in New York. He was named one of the world's 'Top 100 Public Intellectuals' by Foreign Policy  and Prospect. His books include Love, Poverty & War  and Blood, Class & Empire. Thomas Paine's Rights of Man and God Is Not Great were published by Atlantic Books.   Christopher Hitchens died in December 2011. 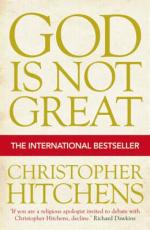 View All Books By Christopher Hitchens