LoveReading View on 1492 - The Year Our World Began

1492- the year pinpointed by the author as the end of the ancient world and the beginning of the modern world – our world. We are taken on a global journey finding out what was taking place in this year; expeditions, collapsing civilisations new empires beginning, Diasporas and discoveries. Using contemporary sources this inventive and highly original history gives us a unique picture of the times.

Like for Like Reading
God’s Philosophers: How the Medieval World Laid the Foundations of Modern Science, James Hannam
1491: The Americas before Columbus, Charles C Mann

1492 - The Year Our World Began Synopsis

The world would end in 1492 - so the prophets, soothsayers and stargazers said. They were right. Their world did end. Ours began. Felipe Fernandez-Armesto traces key elements of the modern world back to that single, fateful year: the way power and wealth are distributed around the globe; the way major religions and civilisations divide the world. Events that began in 1492 even transformed the whole ecological system of the planet. Our individualism and the very sense we share of inhabiting one world, as partakers in a common humanity, took shape and became visible. In search of the origins of modernity, 1492 takes readers on a journey around the globe of the time, in the company of real-life travellers, drawing the together the threads that began to bind the planet. The tour starts in Granada, where the last Islamic kingdom in Europe collapsed, then moves to Timbuktoo, where a new Muslim empire triumphed. With Portuguese explorers, we visit the court of the first Christian king in the southern hemisphere. We join Jews expelled from Spain as they cross the Mediterranean to North Africa, Italy and Istanbul. We see the frozen frontiers of the dynamic, bloody Russia of Ivan the Great, and hear mystical poets sing on the shores of the Indian Ocean. We observe the Aztecs and Incas lay the foundations of a New World in the Americas. Wars and witchcraft, plagues and persecutions, poetry and prophecy, science and magic, art and faith - all the glories and follies of the time are in this book. Everywhere, new departures marked the start of a new configuration for humankind, revealing how and why the modern world is different from the worlds of antiquity and the middle ages. History seems a patternless labyrinth - but a good guide can trace our paths through it back to the moment when some of the most striking features of today-s world began.

'One of the best historians in the world'
Sunday Times

Felipe Fernández-Armesto was born in London in 1950. His books include The Times Atlas of World Exploration, Columbus, Edward Gibbon's Atlas of the World, Barcelona: a Thousand Years of the City's Past, Millennium and Truth. Translations of his work have appeared in twenty languages and he has been shortlisted for numerous prizes. Fernández-Armesto is Professor of Global Environmental History at Queen Mary, University of London, and has been a member of the Faculty of Modern History at Oxford University since 1983. From September 2005 he has been Principe de Asturias Chair in Spanish Culture and Civilization at Tufts University. ... 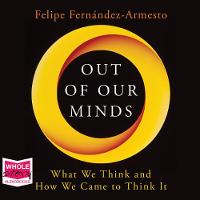 View All Books By Felipe Fernandez-Armesto