Shortlisted for the Theakstons Old Peculier Crime Novel of the Year 2010.

This is the first book since we said a sad farewell to Rebus and is Ian Rankin’s first stand alone novel for a decade. Don’t worry you will not be disappointed as all of Rankin’s skill, imagination and clever plotting is set out in a brilliant story that will keep you on the edge of your seat.

Mike Mackenzie is a self-made man with too much time on his hands and a bit of the devil in his soul. He is looking for something to liven up the days and settles on a plot to rip-off one of the most high-profile targets in the capital - the National Gallery of Scotland.

So, together with two close friends from the art world, he devises a plan to a lift some of the most valuable artwork around. But of course, the real trick is to rob the place for all its worth whilst persuading the world that no crime was ever committed...

'It convincingly shows that he can move with aplomb into another crime form, and tell a story that's typically at once gripping and full of subtle effects, without his depressive detective holding it together' John Dugdale, SUNDAY TIMES

'Doors Open is a lot of fun. It's pacy, witty, full of action, twists and splendid dialogue. And Rebus does make a subtle appearance when an officer describes his police station as "a damn sight quieter since you-know-who retired" '  THE TIMES

'Because Rankin is a master story-teller, that means the reader is quickly swept up and carried along. I read this in one sitting, on a swelteringly hot beach in Greece; I kept meaning to do other things - find a beer, fetch a sunhat, check the BlackBerry - but somehow had to keep putting them off until I finished this chapter; and then the next; until I'd reached the end'  Andrew Marr,  GUARDIAN

'An immensely satisfying, bloody and constantly surprising story of middle-class amateurs mixing it with the big boys. And, as usual, Edinburgh - "a village masquerading as a city" - is a character in itself. So much so that "you-know-who" is hardly missed!' EVENING STANDARD 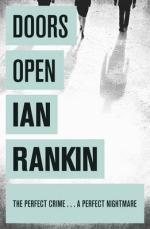 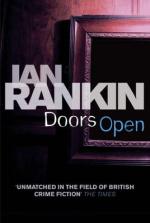