A memoir of the 1950’s that conjures up that stifling post war period in vivid detail, Lorna Sage’s memory for inconsequential happenings, the texture of things, the tastes and sounds that surrounded her as she grew up make this both a tremendously detailed memoir and a valuable portrait of the period. One of the best memoirs of post-war life that’s been written, it still captivates and awes.

And When Did You Last See Your Father?, Blake Morrison

Prize-winning and bestselling when it was first published in 2000, Bad Blood still stands out as an incredibly fresh and original piece of writing. From the eerie atmosphere of her Grandfather’s rural Welsh vicarage to her bright anger as a young girl determined to break out of a small town, Lorna Sage’s story is at once touching, funny and inspiring, and is undeniably one of the great memoirs of our time.

From a childhood of gothic proportions in a vicarage on the Welsh borders, through her adolescence, leaving herself teetering on the brink of the 1960s, Lorna Sage brings to life a vanished time and place, and illuminates the lives of three generations of women. Lorna Sage's memoir of childhood and adolescence brings to life her eccentric family and somewhat bizarre upbringing in the small town of Hanmer, on the border between Wales and Shropshire. The period as well as the place is evoked with crystal clarity: from the 1940s, dominated for Lorna by her dissolute but charismatic vicar grandfather, through the 1950s, where the invention of fish fingers revolutionised the lives of housewives like Lorna's mother, to the brink of the 1960s, where the community was shocked by Lorna's pregnancy at 16, an event which her grandmother blamed on "the fiendish invention of sex".

‘She lifts your spirits even as she hurts your heart’ Allison Pearson, Daily Telegraph

‘A masterpiece. A tale of triumph against the odds’ Blake Morrison, Guardian

‘Devastatingly funny, full of characters and full of exhilarating resilience and sly wit. A memorable account of breaking the rules and breaking out’ Sunday Times, Books of the Year

‘A classic … both for its generosity of spirit and its intensity as an act of self-recovery’ Hilary Mantel, Independent on Sunday, Books of the Year 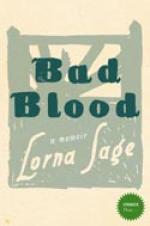 An influential literary critic, Lorna Sage taught English at British and American universities and was most recently professor of English at the University of East Anglia. Her previous books include Women in the House of Fiction, The Cambridge Guide to Women's Writing in English, and a short monograph on Angela Carter.

View All Books By Lorna Sage