A Simple Act of Violence

LoveReading View on A Simple Act of Violence

Winner of the Theakstons Old Peculier Crime Novel of the Year 2010.

R J Ellory was shortlisted for the CWA Dagger in the Library 2009 - the prize awarded for an author's body of work.

This one is big, 500 pages, but all go too fast.  It is a police procedural one, the story of murdered women who appear not to exist.  Taking place in Washington in the mid-term elections, it’s the last thing the police want but we get election politics mixed into a complicated investigation, which is fascinating.  Moving, disturbing and thought-provoking, it grips from the start.

A Simple Act of Violence Synopsis

Washington, embroiled in the mid-term elections, did not want to hear about serial killings. But when the newspapers reported a fourth murder, when they gave the killer a name and details of his horrendous crimes, there were few people that could ignore it.

Detective Robert Miller is assigned to the case, and rapidly uncovers a complication. The victims do not officially exist. Their personal details do not register on any known systems. And as Miller unearths ever more disturbing facts, he starts to face truths so far-removed from his own reality that he begins to fear for his life. 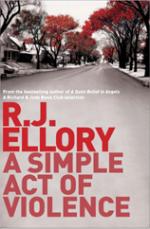