Homecoming shares some of the themes from The Reader, Schlinks highly successful novel from 10 years ago, dealing with the “scars of history” in the wake of the Second World War. The main character goes on a journey to find out what happened to his German father in World War II with his travels reflecting some experiences of Homer’s Odysseus in The Odyssey. Not all the allusions may be clear for those not familiar with Homer, but it still makes for a moving and thought provoking story.

As a child raised by his mother in post-war Germany, Peter Debauer becomes fascinated by a story he discovers in the proof pages of a novel edited by his grandparents. It is the tale of a German prisoner of war who escapes from a Russian camp and braves countless dangers to return home to a wife who believes him to be dead.

But the novel is incomplete and Peter becomes obsessed by the question of what happened when the soldier and his wife met again.

Years later, the adult Peter remembers the novel and embarks on a search for the missing pages that soon becomes a mysterious search for his own father, a German soldier whom he always believed was killed in the war.

"a many-layered tale that draws on The Odyssey for its framework... a fine but elusive novel."
Joanna Briscoe, The Guardian

'Schlink is an accomplished and intelligent writer whose literary prose reads as well as well as the crime thrillers of which he is an acknowledged master.' Evening Standard 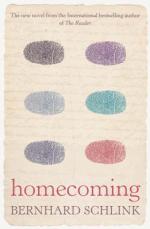