LoveReading View on The Septembers of Shiraz

The plight of a family during the Iranian Revolution. This is very much in The Kite Runner territory, a brave and frightening book of loss, prejudice, prison life, civilian hardship and a lad with his own, very different problems, studying in America. It is heartrending, powerful and very effective in its simple, direct style. An excellent read.

The Septembers of Shiraz Synopsis

In the aftermath of the Iranian revolution, rare-gem dealer Isaac Amin is arrested, wrongly accused of being a spy. In the wake of his terrifying disappearance, his family must reconcile a new world of cruelty and chaos with the collapse of everything they had known.

As Isaac navigates the tedium and terrors of prison, forging tenuous trusts, his wife feverishly searches for him, suspecting, all the while, that their once-trusted housekeeper has turned on them and is now acting as an informer. And as his daughter, in a childlike attempt to stop the wave of baseless arrests, engages in illicit activities, his son, sent to New York before the rise of the Ayatollahs, struggles to find happiness even as he realizes that his family may soon be forced to embark on a journey of incalculable danger.

The Septembers of Shiraz Press Reviews

‘A remarkable debut . . . The Septembers of Shiraz is miraculously light in its touch, as beautiful and delicate as a book about suffering can be.' Clare Messud, Scotsman 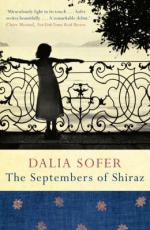 Dalia Sofer was born in Iran and fled with her family to the United States in 1983. She received her MFA in Fiction from Sarah Lawrence College in 2002 and was been a resident at Yaddo. She currently lives in New York City.

View All Books By Dalia Sofer