The Lost Diary of Don Juan

LoveReading View on The Lost Diary of Don Juan

A passionate adventure story about the greatest lover in fiction, Don Juan. 16th  Century Spain is brought to life as we follow the exploits of this charming and chivalrous lothario. Full of romance and action this is a novel to indulge your romantic side.

An editor receives a manuscript purporting to be the lost diary of history's greatest lover, Don Juan. An orphan left on the steps of a covent, Don Juan grew up within the church but his ambitions towards the priesthood fell to the wayside when he was seduced by a young nun. Evicted from the convent, he was taken under the wing of the libertine Don Pedro, the Marquis of Mota, who coached him in skills both courtly and amorous and then employed him as a spy at court. So began a life devoted to giving and receiving pleasure. But Abrams' Don Juan is no playboy; instead Don Juan's mastery of the arts of passion liberates the women he beds. Through his connections with Don Pedro, he is made an 'hidalgo', an honorary nobleman, and is therefore protected from the wrath of the Inquisition by the King, but his position is precarious. Then Don Juan embarks on the most perilous adventure of all - he falls in love, and finds that not only his reputation but also his life is in danger. 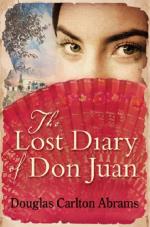 Douglas Abrams was for many years an editor at the University of California Press and HarperSanFrancisco. He is the coauthor on several books about love and sexuality. The Lost Diary of Don Juan is his first novel.

View All Books By Douglas Abrams