Voted 3rd in the Books of the Decade by Lovereading readers.

This is the story of a street of ordinary German people living in the horrors of the Nazi regime.  Interestingly it is narrated by Death but the central character is an 11-year old girl who steals a gravedigger’s handbook and gets hooked on reading.  It’s grim yet uplifting, immensely sad yet light in style and touch.  A very interesting view of World War II and an unforgettable book, it’s aimed at both children and adults and should be read by both.

HERE IS A SMALL FACT

YOU ARE GOING TO DIE

1939. Nazi Germany. The country is holding its breath. Death has never been busier.

Liesel, a nine-year-old girl, is living with a foster family on Himmel Street. Her parents have been taken away to a concentration camp. Liesel steals books. This is her story and the story of the inhabitants of her street when the bombs begin to fall.

THIS NOVEL IS NARRATED BY DEATH

It’s a small story, about:

and quite a lot of thievery.

ANOTHER THING YOU SHOULD KNOW

"A moving work which will make many eyes brim." Marianne Brace, Independent on Sunday

"...a beautifully balanced piece of storytelling...Unsettling, thought-provoking, life affirming, triumphant and tragic, this is a novel of breathtaking scope, masterfully told. It is an important piece of work, but also a wonderful page-turner." Guardian

"A moving story from the German perspective of everyday civilian hardship and surivival under the Third Reich. It celebrates the power of words and love, in the face of unutterable suffering."
Mail on Sunday 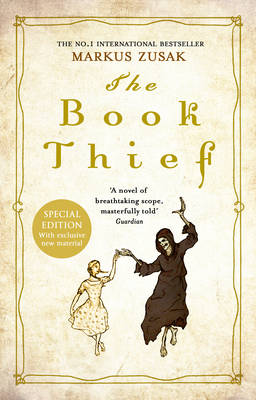 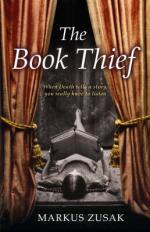