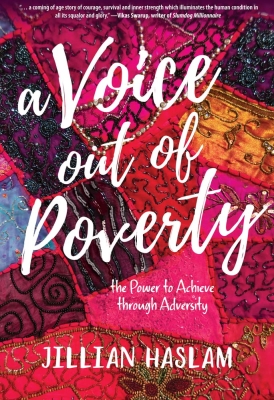 A Voice Out of Poverty The Power to Achieve through Adversity

"Well-written, 'A Voice Out of Poverty' is a difficult read at times because of its content, but will leave you in awe at Jillian's courage and strength."

A heart-breaking memoir that leaves the reader questioning how in the world we know such poverty can exist. A voice out of poverty is the true story of Jillian Haslam who grew up in Calcutta, India and went on to receive the Mother Teresa award. It is the stark tale of poverty, courage, resilience to overcome, child abuse and hardship. How one child's courage to overcome can lead to an adulthood spent helping others. This book is emotional, it's hard at times to comprehend the life of children so young enduring what they did on a daily basis. Well-written, 'A Voice Out of Poverty' is a difficult read at times because of its content, but will leave you in awe at Jillian's courage and strength.

A woman's ascent from devastating poverty and childhood trauma to international standing as a prominent advocate for the poor and helpless. Jillian Haslam uses her story and her voice to speak for the poor and powerless in her heart-wrenching memoir which begins in the slums of Calcutta where she and her family are forced to live after British colonization ended. Haslam first embodied her fierce will to never give up as a young girl, when she stood for hours at a tea shop, begging for a ladle of milk to keep her newborn sister from dying of starvation. A Voice Out of Poverty leaves the reader asking how someone so young had the tenacity to overcome so much—and then go back to face it all again in a passionate effort to spare others from the suffering that she endured and witnessed all around her growing up. Winner of the prestigious Mother Theresa International Memorial Award, Jillian has embraced her purpose to become an important driver of global action for the most urgent needs of the underserved in India and the UK, especially during the pandemic.

The Winding Road to Portugal

The Vanity of Humanity

Never Answer To A Whistle

Memoirs From A Council Estate