The Leadership of Muhammad: A Historical Reconstruction

LoveReading Expert Review of The Leadership of Muhammad: A Historical Reconstruction

An insightful and intellectual look into the ways in which the Prophet Muhammad was a great and successful leader.

‘The Leadership of Muhammad: A Historical Reconstruction’ by Joel Hayward is an insightful and intellectual look into the ways in which the Prophet Muhammad was a great and successful leader. Looking not only at the theological texts, Hayward references early Arabic sources to examine the ways that Muhammad excelled during his twenty-three years as a leader. There are traits mentioned throughout the book that I’m sure would be beneficial to modern leaders (setting an example, good delegation, being approachable to discuss alternative ideas when appropriate) however the author is careful not to explore the Prophet's actions in relation to modern concepts, thought processes and standards. I thought that this book was authoritative and informative and I think that it would appeal widely to those with an interest in history as well as more specifically in Islamic studies. I found the writing clear and accessible throughout, making it easy to comprehend for non-academic purposes. I also liked the way that the book was structured. Each chapter has a clear focus, whether it be Muhammad’s Military leaderhsip, strategic vision or his leadership through diplomacy, with a great deal of detail and plenty of references to extant sources. This book is clear and concise and educated me on the history of Islam as well as the successes of the Prophet Muhammad and the leadership qualities that led to such success. Whether you’re looking for a book of History, Islamic studies, or an interesting look into great leadership, ‘The Leadership of Muhammad: A Historical Reconstruction’ has plenty to offer.

The Leadership of Muhammad: A Historical Reconstruction Synopsis

Given the Islamic Prophet Muhammad’s immense impact on history, there are surprisingly few books that specifically analyze his leadership. The few that exist maintain that Muhammad was a wonderful leader because he was a wonderful man; that is, he succeeded in his mission because of his superior morality and personal qualities. Professor Joel Hayward sees this as an incomplete and almost inadequate explanation. He does not disagree that Muhammad was a moral and decent man. Yet he has approached the Prophet’s leadership from a different vantage point. He has scrutinized the earliest Arabic sources impartially according to the strict standards of historical inquiry in order to ascertain whether Muhammad’s conscious actions, behavior and methods can provide any substantial and meaningful insights about the effectiveness of his strategic leadership. Hayward concludes that Muhammad was an uncommonly astute, situationally aware and self-reflective man with the ability to create and communicate a believable strategic vision of a necessary and desirable future. When reinforced constantly by his emotionally intelligent, skillful and very hands-on leadership, his cleverly communicated vision persuaded increasing numbers of people to follow him and risk everything willingly in the struggle to make real the bold new world he foresaw. Hayward demonstrates through original, meticulously researched and rigorous analysis that Muhammad was “a profoundly effective leader”. This engaging, accessible yet deeply scholarly book makes a major contribution to both leadership studies and the Prophet’s biography.

What To Read After The Leadership of Muhammad: A Historical Reconstruction 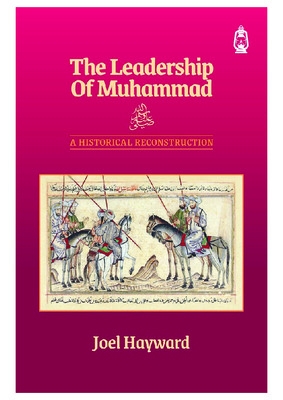 View All Books By Joel Hayward