The Glitter in the Green

LoveReading Expert Review of The Glitter in the Green

Like its stunning subjects, this informed, passionate personal journey into hummingbird habitats, behaviours and mythology will enchant bird-lovers and lay readers alike.

Befitting its beautiful subjects, Jon Dunn’s The Glitter in the Green: In Search of Hummingbirds is a dazzling work of nature writing. Blending a thrilling sense of personal adventure with bewitching detail on the habitats, habits and mythology of these most handsome of birds, the book has huge appeal for both dedicated bird-lovers and general readers.

Framed by the author’s inspiring viewing of the Natural History Museum’s hummingbird cabinet, Dunn shares how he was driven to feed his hummingbird addiction by immersing himself in their world - “I had to see them for myself. Stuffed historical specimens had sown a seed that had, in time, flourished into a consuming hunger”. To that end, he plans and embarks on a journey to see these birds with their “otherworldly, metallic and jewel-like plumages”, their “rainbow array of colours, shapes and sizes” across their global range - from the wilds of Alaska, to the very tip of Argentina.

As well as taking in hummingbirds’ full geographic range (with each place and its people evoked in glorious technicolour), the book’s style has a broad wingspan too - it flits and flutters from having the tension of a thriller, the poetic impact of a literary prize-winner, and the unadulterated glee of a piece of personal passion. Having failed to find one myself (to date, at least), boy was I envious of the author’s enraptured description of seeing Bee Hummingbirds (the world’s smallest bird) during an entrancing Cuban experience that left him feeling “a little like Alice in Wonderland”.

The Glitter in the Green Synopsis

No family of birds has quite the compelling allure offered by the hummingbird. For centuries they have captured our imaginations: revered by Native Americans, coveted by European collectors and admired worldwide for their jewel-like plumage, acrobatic flight and immense character.

Though their renown extends throughout the world, hummingbirds are found exclusively in the Americas. Small in stature yet fiercely tenacious, they have conquered every habitat imaginable: from boreal woodlands to deserts, mangrove swamps to volcanic slopes, and on islands both tropical and sub-polar. The Glitter in the Green takes us on an unforgettable journey in search of the most remarkable examples of this wildly variable family. There's the Bee Hummingbird in Cuba, the smallest species of bird to have ever lived; the diminutive Rufous Hummingbird, whose annual migration exceeds 3,000 miles; and the critically endangered Juan Fernández Firecrown, marooned on the remote Pacific island that inspired Robinson Crusoe.

Jon Dunn brings us closer than ever before to these magnificent creatures, exploring a heady mix of rare birds, a history redolent with mythology, and the colourful stories of the people obsessed with hummingbirds through the ages. With great passion for his subject and a taste for adventure, Dunn transports us to wondrous landscapes from Alaska to Tierra del Fuego, and invites us into the kaleidoscopic world of the hummingbird - the bird that has won the hearts and minds of mankind for millennia.

'Exceedingly well-researched and packed with fascinating lore, it should appeal to avid birders and general readers alike' - WALL STREET JOURNAL

'As gleaming and mesmeric as its tiny subject' VANITY FAIR

'Ever thoughtful and engaging, Jon Dunn pursues these dazzling creatures through dust and jungle to the chillier shores at the far end of the world' - BENEDICT ALLEN 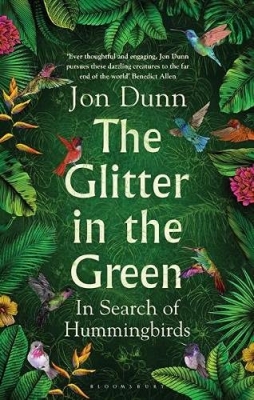 View All Books By Jon Dunn