LoveReading View on Merchants of Hate

Merchants of Hate is Jack Jardel's first novel and what an entrance onto the literary scene! Set in the near future at the time of writing, the author has imaginatively and, in some cases prophetically, described events, which could or are about to happen in real life.

An unprecedented natural disaster disables all the manmade satellites orbiting the Earth and with them all digital forms of communication. Through the experiences of several people in different countries around the world, we learn of the unfolding chaos that this catastrophic event causes. Written in short sections, the book keeps readers on their toes, with this constant change of voice and location and the emerging pattern of the relationships between the characters. The writer examines some of the most pressing issues of modern times in this chillingly detailed dystopian scenario, especially the impact of fake news and social media on democracy.

This is a bold and powerful story, convincingly exposing the vulnerability of the society we have sleepwalked into. The players are frighteningly realistic and their actions, in the light of recent news, not so improbable or farfetched as we might once have thought. A gripping read for anyone who cares about the future of this uncertain world.

Merchants of Hate is set in a repressive world where fake news has become government policy. Reality is shaped by Britain’s Alternative Facts Bureau. The disinformation hides an unprecedented natural disaster. America’s unstable new president doesn’t even believe the warnings, he thinks it’s another science-based conspiracy. Elise Evans is one of the few journalists still able to tell the truth, it’s on her to alert the public before it’s too late. Lives will change irrevocably; nations face collapse. Who will survive the Crash? Merchants of Hate is the debut novel from Jack Jardel. It’s a bold and powerful piece of speculative fiction, transporting us to the thrilling chaos of a dystopian world in crisis, whilst exposing the frailty of the one we currently inhabit. 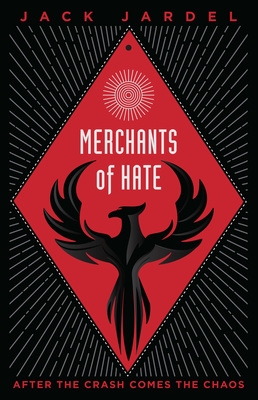