LoveReading View on A Tall History of Sugar

Beginning in rural Jamaica in the late 1950s with the island on the verge of independence from Britain, A Tall History of Sugar is an all-consuming story of love, history and self-determination whose author, Curdella Forbes, possesses a majestic ability to evoke the big from the small. Rich details of dialogue, of time and place, of inner states and the outer world, intermesh with a sweeping sense of history, with its pertinent opening line referencing the state of contemporary Britain: “Long ago, when teachers were sent from Britain to teach in the grammar schools of the West Indian colonies (it was Great Britain then, not Little England, as it is now, after Brexit and the fall of empire)…”

At the heart of this mythic tale is Moshe, whose appearance and biblical discovery as a baby in a twist of sea grape trees shrouds him in mystery, and elicits much mockery and fear. “With his pale skin, one sky-blue eye and one dark-brown eye…people said the boy just looked like sin. Big sin at work when he was made.” After spending his first years in the company of the childless woman who found him, Moshe forms an unbreakable bond with fellow outsider Arrienne. At school, “with the large girl sitting silently beside him, he felt that he would die of happiness.”

While both Arrienne and Moshe excel in their studies, artistically gifted Moshe leaves his politically-engaged soul mate and arrives in England during the hot, fractious summer of 1976, where he hopes to find his birth father. His search takes him from Brixton, borough with a “thousand faces”, to Bristol, where he encounters the incongruity of former slave-owners being celebrated as hero philanthropists, with the urge to be close to Arrienne remaining a constant draw through all his experiences.

Complex, compelling and luminously lyrical, this tells a powerful tale I know I’ll return to over and over.

Discovered amidst a tangle of sea grape trees, Moshe Fisher's provenance is a thing of myth and mystery; his unusual appearance, with blueish, translucent skin and duo-toned hair, only serves to compound his mystique. Equally feared and ridiculed by peers as he grows up, he finds a surprising kindred soul in the striking and bold Arrienne Christie, but their complex relationship is fraught with obstacles that tear them apart as powerfully as they are drawn together.

Beginning in the late 1950s, four years before Jamaica's independence from colonial rule, A Tall History of Sugar's epic love story sweeps between a rural Jamaica, scarred by the legacies of colonialism, and an England increasingly riven by race riots and class division.

A Tall History of Sugar transports you to warm, colourful Jamaica, both in content and in style. It's an antidote to depression, a book to escape with . . . This is a subtle book about racism in a post-colonial world, but it is also a beautiful, piercingly imaginative tale about transcendent love . . . The lyricism makes the story soar . . . each page has something to dwell upon, and every line is a pleasure -

A rich tale of love in trying times. Definitely a book you'll want to savour -

Eclectic, feverish . . . Who [Moshe] is and who he becomes . . . is a riddle that unfolds in episodic bursts and linguistic flourishes -

Densely descriptive, linguistically rich . . . its heart is the thread connecting two people who believe they are the halves of a single whole, and the intense, exquisite agonies of their obsessive love -

Forbes' novel has the register of a fairytale or a myth; Arriene's narration flows in storytelling fashion and is as intimate as a tale shared around a campfire. Moshe himself becomes a cipher through which Forbes explores issues of racism, heritage, colonialism and identity. Forbes' skilful and instinctual use of local languages and dialects further taps into a rich Jamaican oral culture, in a story that dreams of being read aloud -

The premise . . . is ingenious, and the novel is an epic modern fairytale that offers the pleasure of being steeped in Forbes's poetic, intoxicating sentences right from the opening line -- SARA COLLINS -

A novel of Jamaica, brimming with magic, passion and history . . . Forbes's writing combines the gale-force imagination of Margaret Atwood with the lyrical pointillism of Toni Morrison . . . This is a book for savouring -

A Tall History of Sugar is captivating from the very first page. Mythic in dimension yet movingly human in its details, alive with atmospheric richness, it heralds a fascinating new voice in English-language fiction -- JENNIFER EGAN - 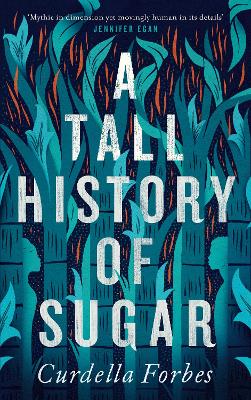