LoveReading View on Families of Spies

Corkscrewing through Italy, there is a tangled web of intrigue to unravel in this stimulating spy novel. We start during the summer of 1977 and the murder of relatives of the Director General of Defence Intelligence. The second in the Dylan Series highlights a mystery under the cloak of espionage thriller. I advise that you begin with Awakening of Spies, as I don’t feel that this is a series you can step into the middle of due to the intricacies of setting. Knowing the central characters meant I could focus on the rest of the plot (again though, no wandering off as you need to concentrate). The writing feels as though you are reading a memoir, with Thomas Dylan’s memories spilling forth onto the page. Brian Landers ensured that I was in the 1970’s and I really felt the history and spirit of the time. Families of Spies, delving as it does into the not too distant past, is an interesting and convincing read.

Eveline Sadeghi disappears while sailing from Kefalonia to Sicily. The authorities conclude there must have been an accident but it soon becomes obvious that Eveline and her Iranian husband have been murdered. The murderers have made dangerous enemies. Eveline’s brother is Admiral Lord Grimspound, the Director General of Defence Intelligence.

He demands that MI6 investigates his sister’s death but they have different priorities: there is a spy at the Sighonella NATO airbase on the island.

Grimspound sends Julia and Thomas Dylan to investigate. They discover that a suspiciously well informed local detective is already investigating another murder and is convinced that the murders are linked. The link he claims is not in Sicily but in the feuding world of Iranian exiles.

But there is a Sicilian connection, a connection that goes right back to an infamous Mafia massacre in 1947. 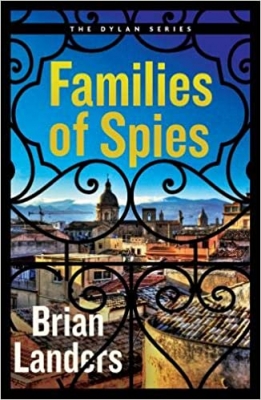