The City That Barks And Roars

LoveReading View on The City That Barks And Roars

The City That Barks and Roars is a humorous anthropomorphic crime fiction.

As I started reading, following Chico Monkey as he heads into the city to start his new detective role there was that this book was going to be like Zootopia but rewritten for an adult audience. This was a recurring thought and I think it’s a very good way to explain or summarise the book in a sentence so I was amused when I saw it mentioned in the description after I had finished reading. I particularly like the attention to detail shown throughout the plot, the logistics of Chico Monkey getting into the car belonging to his partner, Frank Penguin as they get to work hunting for Lucas Panda. As the search for Frank’s missing partner goes on, they realise it’s connected to a darker web of corruption.

I liked this book and I think it would be good for people who like good old-fashion crime mysteries, although this one does have a furry and feathery twist. I thought that the characters were all very different and I enjoyed trying to work out what animal they were before being told, and discovering whether they had their own ulterior motive that would pull Monkey and Frank deeper into the mire.

The City That Barks and Roars is a quick and entertaining read that I enjoyed and would recommend for anyone looking for a good detective mystery.

The City That Barks And Roars Synopsis

They hit cafes for breakfast then nine to five at the office, and fritter away evenings at jazz clubs.

But paradise is still a distant dream, for there are devils amongst the angels.

Lucas Panda is missing; clues on the riverbank suggest he was probably kidnapped. Enter Frank. Who else you gonna call? Hard-boiled penguin and the finest detective in town. And meet his new partner, Detective Chico Monkey - yeah, the wisecrackin' kid with all the snappy suits. But the stakes have been raised; three more creatures are missing and the citizens of Noah's Kingdom are faced with possible extinction. Can the grouchy bird and plucky young ape save the city from doom? Or, will evil prevail and escape the claws of justice?

'Animal noir' peppered with plenty of humour; this thrilling debut novel from award-winning comedian JT Bird is an intriguing blend of Jungle Book and Chinatown (Zootopia for grown-ups?! Watership Down with Fedoras!?) - perfect for fans of animal fiction, or mysteries, adventure and crime. A gripping yarn, packed with weird and wonderful creatures, for youngsters and adults alike (or anyone who's crying out for anthropomorphic detectives!!) 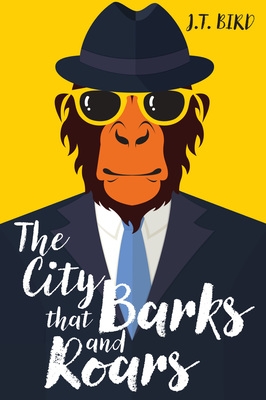 View All Books By JT Bird