Set within the viciously violent reign of Jack the Ripper this is a historical crime novel with real attitude. When Susannah reads newspaper reports detailing a number of ferocious murders, she fears her new husband may be involved as he has been disappearing at night and returning bloodied and secretive. Goodness what a premise this is! While blood-soaked and brutally descriptive, it feels convincing and authentic rather than glorified and salacious. Clare Whitfield doesn’t hold back, but I felt she looked beyond the obvious violence with thoughtful consideration. Not only does she explore the Jack the Ripper case with this novel, she also highlights violence against women, abject poverty, and prejudice. Through the novel we are shown a glimpse of other lives, a connection begins to form before deliberately slicing away again to the main story. This is one of those books where there is no perfect shining light of a character to attach yourself to, life is a struggle, at times a battle, just to survive. Compelling, thought-provoking, and powerful, People of Abandoned Character has been chosen as a LoveReading Debut of the Month.

He is my husband.

To honour and obey.

Until murder do us part.

London, 1888: Susannah rushes into marriage to a young and wealthy surgeon. After a passionate honeymoon, she returns home with her new husband wrapped around her little finger. But then everything changes.

Thomas's behaviour becomes increasingly volatile and violent. He stays out all night, returning home bloodied and full of secrets.

When the first woman is murdered in Whitechapel, Susannah's interest is piqued. But as she follows the reports of the ongoing hunt for the killer, her mind takes her down the darkest path imaginable. Every time Thomas stays out late, another victim is found dead.

Is it coincidence? Or is her husband the man they call Jack the Ripper?

I can’t recommend this book highly enough - as a thriller, superb historical fiction or for anyone who loves Ripperology, it’s a five star read from me and a book that will definitely be staying on my bookshelves. Full review

A page- turner set in Whitechapel, London in the late 19th century. Susannah's doctor husband has changed since they returned from their honeymoon; could he be involved in something sinister? Full review

This well-researched, wonderfully titled first-person narrative opens in Reading in 1885 and closes in Chelsea in 1890, though the plot centres around the murders of women in Whitechapel during 1888. Full review

Set in London, a different take on Jack the Ripper. Newly married Susannah begins to suspect her charming surgeon husband of being the serial killer on account of his unpredictable behaviour. A dark and atmospheric story. Full review

Wonderfully compelling, this is a powerful and provocative crime thriller that adds to the legend of Jack the Ripper. Full review

This book is a brilliant dark historical psychological thriller. It fully immerses you in the World of Jack the Ripper and a macabre Victorian London. A five star read. Full review

Has Susannah Chapman landed on her feet and made herself safe by her marriage to the dashing young surgeon Thomas Lancaster, or has she just married Jack the Ripper? A deftly woven tale of survival and betrayal in Whitechapel 1888. Full review

I would really recommend this book, it’s an easy read, a page turner and I look forward to Clare Whitfield’s second novel. Full review

'An astonishing book set in a Victorian London plagued by Jack the Ripper. Whitfield's narrator is Susannah, an ex-nurse who rushed into a rapidly souring marriage with a wealthy surgeon and starts to believe that her husband might be Leather Apron himself. I'd be amazed if it isn't dominating the shortlists come next year's awards season' M.W. Craven. 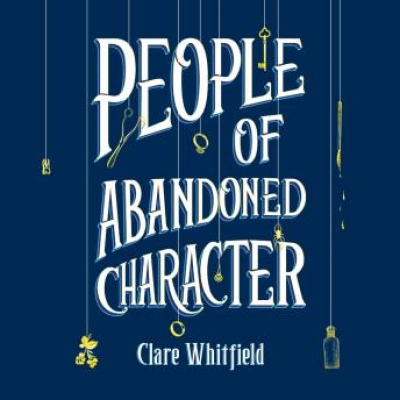