Every Light in the House Burnin'

Every Light in the House Burnin' Synopsis

The remarkable, emotional debut novel, both funny and moving, which was longlisted for the Orange Prize for Fiction, from the critically aclaimed Andrea Levy, author of the Orange Prize winning SMALL ISLAND and the Man Booker shortlisted THE LONG SONG.

'Better opportunity' - that's why Angela's dad sailed to England from America in 1948 on the Empire Windrush. Six months later her mum joined him in his one room in Earl's Court...

...Twenty years and four children later, Mr Jacob has become seriously ill and starts to move unsteadily through the care of the National Health Service. As Angela, his youngest, tries to help her mother through this ordeal, she finds herself reliving her childhood years, spent on a council estate in Highbury.

Every Light in the House Burnin' Press Reviews

'The only disappointment is that after two hundred and fifty pages, it ends' - Literary Review

'Levy's skill and cunning leave the reader shaken' - The Voice

'Humorous and moving, unflinching and without sentiment' - Independent on Sunday

'The story is well told, does not dodge complexity and rings true' - The Times 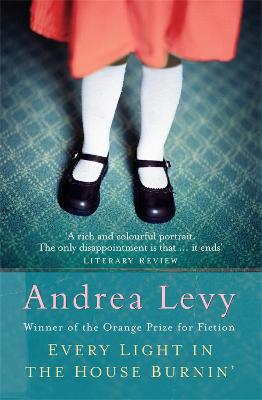