LoveReading View on The Richness

'The Richness' by Stephen Driscoll is a powerful indictment of racism in all it's forms, wrapped up in a tale of love, cruelty and suffering that spans five centuries and three continents. It is well written, meticulously researched and chillingly relevant to the present-day crisis.

The book comes in three parts. The first follows three young Irishmen, brothers John and Conor O'Driscoll and their cousin, Patrick O'Mahoney, who left Ireland in the early 17th century, each for a different reason and with a varying degree of compliance. We track the men and their fortunes until their deaths, with two of them eventually reuniting briefly in the West Indies. This section was full of historical surprises for me and was thoroughly readable, exciting and heart-wrenching as well as informative.

The second section outlines the social and political issues of the Caribbean and Ireland, the inequalities and historical attitudes which have led to the existence of everything that is unfair and unacceptable in today's world. It's written with a great deal of passion and background knowledge.

Finally, we are brought almost to the present day, when two strangers meet at a series of lectures and discover that they have more than physical attraction in common. This is where the title of the book comes into it's own, as the author demonstrates that none, absolutely none, of us would be who we are now, were it not for the variety in our heritage and the part that all races and religions have played in the past. We are human beings, first and foremost, and no-one has cause or reason to believe they are superior to any other in any way.

It's the 1600s. Two brothers of the O'Driscoll family and their first cousin from Baltimore, Ireland, leave their homeland in different circumstances. One volunteers as an indentured servant in Saint Kitts; the second is stolen by pirates and enslaved in Algiers; and the third is banished to Barbados by Oliver Cromwell. A Malian man is kidnapped, sold to slavers in The Gambia, and transported to Nevis.

It's the 2000s. A black woman and a white man meet in Smethwick, West Midlands England. Do these individuals have anything in common?

Spanning four centuries, 'The Richness' explores themes of Black/Irish/British history, slavery, religion, migration, colonialism, multiculturalism and racism. It shows how dramatic actions of the past can have ironic consequences that continue to be relevant in the present.

An inspiring and moving read, that travels through history, which at its core tells of the strength of the human spirit. Full review 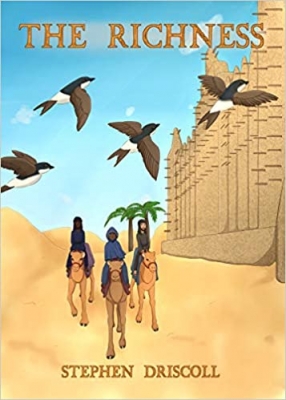 View All Books By Stephen Driscoll