LoveReading View on The Van Apfel Girls Are Gone

A scorching, provocative, heady hit of a read, that also feels refreshingly unique. The setting is Australia, three girls disappear and years later Tikka looks back at what happened and how the events have affected her life. Felicity McLean sets two time frames in motion, but the story doesn’t flow in a straight line, words meander, get caught in an eddy before rushing onwards again. It took me a few pages to settle into the writing, and that is just because it is so wonderfully and distinctively different. Tikka’s voice is compelling, her childhood evokes bright vivid colour and touchable vibrant feelings which all spill from the page. She didn’t just visit my thoughts, but set up home too. As I read, punches of realisation landed with precision, opening my eyes, making me consider. The Van Apfel Girls are Gone really is the most special debut, it is dark, atmospheric and tragic, yet bright, engaging and satisfying too. Chosen as a LoveReading Star Book, this debut is one that I can highly recommend.

Bookriot's 50 spring must-read crime novels 'One part mystery, one million parts amazing.' Cosmopolitan 'A coming-of-age drama as much as a crime story...haunting, atmospheric and genuinely mysterious.' Guardian 'An entrancing, melancholy debut... Mesmerising.' Daily Mail We lost all three girls that summer. Let them slip away like the words of some half-remembered song and when one came back, she wasn't the one we were trying to recall to begin with. Tikka Molloy was eleven and one-sixth years old during the summer of 1992. That summer, the hottest on record, the Van Apfel sisters - Hannah, the beautiful Cordelia and Ruth - mysteriously disappeared. Did they run away? Or were they taken? The mystery of their disappearance has never been solved. Now, years later, Tikka has returned home and is beginning to piece together what really happened. The summer that shaped her. The girls she couldn't forget. 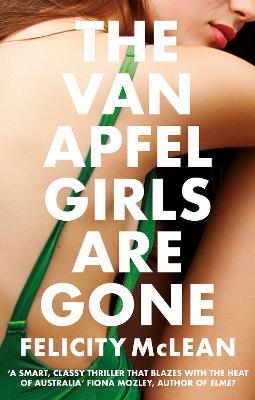 View All Books By Felicity McLean