The Court of the Air

LoveReading View on The Court of the Air

This is a tale of intrigue and drama with thoroughly likeable characters who you are rooting for all the way through their various adventures. If Philip Pullman is your kind of author then give Stephen Hunt a try, he wonâ€™t disappoint.

The Court of the Air Synopsis

Two orphans on the run, each with the power to save the worldâ€¦

When streetwise Molly Templar witnesses a brutal murder at the brothel she has recently been apprenticed to, her first instinct is to run back to the poorhouse where she grew up. But there she finds her fellow orphans butchered, and it slowly dawns on her that she was the real target of the attack. For Molly carries a secret deep in her blood, a secret that marks her out for destruction by enemies of the state.

Oliver Brooks has led a sheltered existence in the backwater home of his merchant uncle. But when he is framed for his only relative's murder he is forced to flee for his life, accompanied by an agent of the mysterious Court of the Air. Chased across the country, Oliver finds himself in the company of thieves, outlaws and spies, and gradually learns more about the secret that has blighted his life.

Soon Molly and Oliver will find themselves battling a grave threat to civilization, an ancient power thought to have been quelled millennia ago. Their enemies are ruthless and myriad, but the two orphans are also aided by indomitable friends in this endlessly inventive tale full of drama, intrigue and adventure.

The Court of the Air Press Reviews 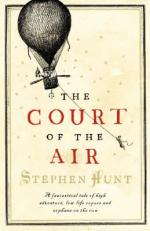 Stephen Hunt has written one previous book, the fantasy novel For the Crown and the Dragon, which won the WH Smith New Talent Award in 1994 and was published by the UK's largest bookseller under the auspices of their New Talent Initiative. It went on to get praise in reviews as diverse as Locus, the Guardian, Science Fiction Chronicle, Arcane, Broadsword and various other newspapers and genre titles. Stephen Hunt set up one of the first science fiction and fantasy web sites, www.SFcrowsnest.com, in 1994, the same year Netscape was launched as a graphical web browser. Today Stephen Hunt's SFcrowsnest....