Shrapnel in the San Fernando Valley

LoveReading View on Shrapnel in the San Fernando Valley

Shrapnel in the San Fernando Valley started at a sprint and continued at an unrelenting pace until the final pages. If this memoir didn't start with an introduction and disclaimer from the author I'm not sure I would have believed it was non-fiction. I even did a brief internet search of the author to make sure. The stages of Carol’s life covered in this book were certainly event-filled, not always in a good way.

Here’s a brief summary of the events and topics candidly addressed by Carol in Shrapnel in the San Fernando Valley: The death of her father; her childhood; conflict with her mother and family as a whole; sexual abuse from various parties from a young age; her early working life; getting in to Scientology; drug addiction; her art and poetry development; marriages and relationships; friendships; her band; getting out of Scientology; the death of her mother and opening an art studio after a successful application for the Pollack-Krasner Foundation Grant. There was a lot to fit into 300 pages, with artwork and photographs as well, and it meant that the book jumps quickly between some tender subjects from the start. After further reading, I think this pace gave you more understanding about the writer.

I enjoyed the insight into Scientology the most. I'd heard about the Church but didn't know anything in-depth about it. I thought Carol came across as naïve throughout the book. This is understandable considering how old she was during early traumatic events featured in the book. The honest and endearing writing dragged me into Carol’s story as a bystander, which then made it frustrating to witness her fall in love very quickly, only to end up hurt again. This speed could also be attributed to the overall length of the book and the amount of information that was shared. It was great to see Carol eventually make peace with her mother and herself and experience success.

Overall this was an interesting, fast-paced and challenging insight into an artist, writer, musician and ex-Scientologist. If you are familiar with Carol’s work or want to know more about someone's experiences as a part of the Church of Scientology while also covering several difficult subjects then this is the book for you.

Luck is a very thin wire between survival and disaster, and not many people can keep their balance on it. —Hunter S. Thompson

Artist, writer, and drummer, Carol Es grew up neglected and believing she was inherently bad. Having a mentally abusive mother and an unstable family that moved around a dozen times before her ninth birthday, she'd also endured horrific sexual abuse. By age 14, she left home unnoticed, emancipated herself by 15, and from there wound up trapped in a cult for 20 years.

Seduced by the celebrity that lured her into Scientology and their magic promises to fix her broken life, Carol maintained an unbreakable bond with her passions as a means of survival. She exhibited her art and played music tirelessly in bands on Sunset Boulevard and the LA circuit. She toured the US and Canada, signed with Sony Music, but all the while she'd been conditioned to hide and deny her own mental illness in order to stay true to the doctrine of L. Ron Hubbard--a man who claimed psychiatric treatment was an evil hoax. In her memoir, Carol explains how it was even possible to be both brainwashed and live "normally" in the world of contemporary art and rock n' roll.

After a tumultuous childhood and years of mind control, Carol has taken a huge stride out of the blackness of fear and silence by completing Shrapnel in the San Fernando Valley in the face of resistance. With gallows humor and a unique perspective, she invites readers into her confidence, laying bare her most raw and intimate revelations on her seemingly endless search for self-worth as a woman. Managing to embrace the painfully sad scenes of her past and her biggest embarrassments, she finds absurdities one can only laugh about through tears.

Illustrated with original sketches throughout, Shrapnel in the San Fernando Valley is not just another survivor's tale or misery memoir, it is a courageous, relatable story about gaining the ability to identify growth from experience. Sometimes true victory comes when learning, relearning, and coming out okay is triumph enough. Carol Es has earned many honors during her career in the arts, including a Pollock-Krasner and the Wynn Newhouse award.

Her work can be found in the Getty Museum, the National Museum of Women in the Arts, and MOMA. As a musician, she has worked with renowned producers, recorded with artists such as Rickie Lee Jones, and has toured North America. In 2019, she won the Bruce Geller Memorial Award "WORD" grant from the American Jewish University. She currently lives in Joshua Tree, California. For more info, visit Carol's blog at esart.com/blog. 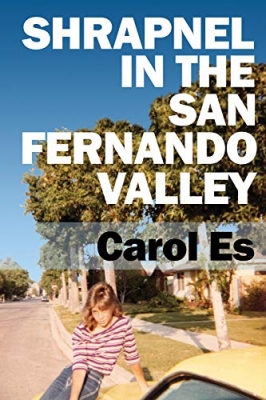 View All Books By Carol Es