This is an unusual take on Christmas but so very good with hints of the future. Children no longer want the traditional toys and it seems video games are all they ask for so Santa and his elves have no work and then Santa finds a way to keep the workshop alive but it definitely isn't for the children. Back in the 'normal' world Dallas Stone a cop who 'did things his own way' has been allocated a partner much to his disdain but Joel is new out of university and is very much a rules guy, saying they would clash is an understatement but when they get information about Santa's little operation they have to investigate. What follows is such a great ride that I was rushing to see how it would end and in between, it held some funny parts and some poignant parts but all in all it was a good book. Well worth a read. I love David Blake's Space Police books and this reminded me of them.

The increasing popularity of video game consoles and home video recorders render requests for traditional toys at an all-time low.

With his workshop rapidly losing popularity and demand amongst the children of the world, Santa Claus decides to take his business in a new direction. International drug trafficking.

With his new business plan and slave-like working conditions causing great pain and misery amongst his elf employees, one of the elves escapes to the big city to enlist the help of Dallas Stone, a maverick cop who only knows one way to fight crime.

Action has a new face – and a terrible mullet. 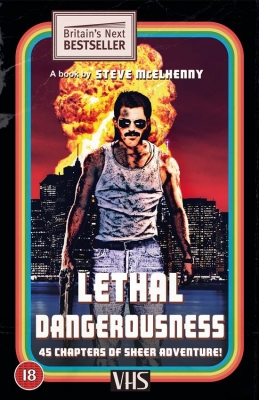 View All Books By Steve McElhenny