The Priest of Santa Maria

LoveReading View on The Priest of Santa Maria

The Priest of Santa Maria is a fast-paced thriller. An entertaining read, it had me gripped to the end. In the prologue, we discover the origin of a locked box from Babylon and are introduced to a man and his daughter, the current custodians, living in Switzerland, and a woman named Angelica living in a convent in Italy. What is the connection that brings them together? And what does it have to do with a young priest named Christiano who is employed as a temporary minister at the convent? Although reluctant at first, the feeling he has towards Angelica is unlike anything he has come across. He is taken aback by the urge he has to protect her even though he may lose his vocation by doing so. This is a vivid portrayal of characters we want to engage with and an unputdownable story we don't want to end. I was pleased to discover it is part of a series and I, for one, will be looking forward to the next book from this talented storyteller.

The Priest of Santa Maria Synopsis

A Catholic priest fresh out of the seminary. A mysterious young woman in hiding from her past with a secret that could destroy the Church.

Christiano finds himself obliged to act as the temporary minister of a small town convent. There he meets the captivating Angelica who, unknown to him, has been seeking refuge at the convent under the supervision of the abbess. Within a month, sparks ignite between them, but the abbess intervenes demanding that Christiano leave the convent before she reports his conduct to the Monsignor. Little do they know his timely arrival is about to clash with Angelica’s dangerous past. This leads to catastrophic events that shatter the very foundations of the convent and change the lives of all involved.

Forced to flee the abbey, Christiano reluctantly takes on the role of Angelica’s protector as destiny throws them together on a journey he cannot refuse. Pursued by a malevolent alliance intent on capturing Angelica, dead or alive, they face insurmountable danger as they race across Italy to keep her and the secret safe.

Can the mild-mannered Christiano rise to the challenge?

This was a complex and exciting book Full review

It's a sometimes gory and violent tale in spite of being peopled by many deeply religious characters as well as Mafiosa. I found it exciting and emotional. Full review 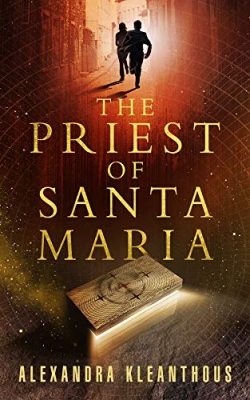 Alexandra Kleanthous was born and raised in Greater London. She attended Film School, where she explored the world of story-writing in fine detail. After writing and directing a few short films, her graduate film was screened internationally, including The Edinburgh International Film Festival. She has worked as a feature writer and even an artisan chocolatier. She is a keen lover of the outdoors, and when she can get away, she enjoys coastal walks with her dog.  You can find Alexandra on Instagram: @alexandra_kleanthous