"In My World" A Daring Quest for a Life hanging Treasure

This hard-to-categorise quest story about an inquisitive child – Deon - who embarks on a lifelong mission to find his place in the world, is driven by the author’s desire to share his interest in imaginary realms.

As a child, the narrator’s mother asked him “who he wanted to be in future”. Rather than give the expected answer of a superhero, or a fireman or policeman, Deon declares that he will “find a treasure”, but not the usual kind of treasure that’s buried in the depths of the earth or ocean. “I think I want to find a different kind of treasure.” He’s unsure as to what this means, but believes that “I’d come into this world with the word “treasure” deeply coded in me, but as a child I couldn’t have known its meaning.”

Throughout his troubled childhood Deon feels “trapped entirely in my own dreamlike identity, filled with mysterious occurrences such as having transmitted, somehow, visions from objects I touched”. Deeply dissatisfied as a working adult, and desperate to “find my place in this world”, Deon decides that he must visit “magical” Glastonbury. Though much otherworldliness spills forth during this pilgrimage (during which he’s informed about chakras and the magic of crystals), the language retains a calmly straightforward tone as Deon’s quest comes to a revelatory climax. One for fans of spiritually-charged fiction.

Growing up in a distressed family, having an unsettled schooling, Deon found himself not understood by the people around and often succumbed to his imaginary world of adventure. As a child Deon loved spending time in Nature and one day aspired to find a treasure, however he didn’t know what that treasure would be.

He finds a job at a departmental store and moves out of his troubled home but nothing much changes in his life. He feels drained and lost in the daily fight for survival in the everyday life of earning and spending.

One day being in his 20s his frustration leads him to make a life changing decision; to begin a quest for a deeper meaning of his life. Deon decides to take a trip to Glastonbury and his life is never going to be the same.

In his daring quest Deon accidentally enters a magical portal where he is faced with trials and spell binding encounters that lead him to find the treasure that he was always looking for. 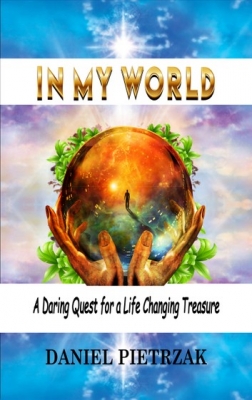 View All Books By Daniel Pietrzak