LoveReading View on The Narrow Land

It’s 1950 and ten-year-old Michael is heading to Cape Cod for the summer. His train journey from Grand Central sets the tone, with the spectre of WWII looming large in a very real way as his memory streams images from train journeys he took in Germany, when it was essential to “keep your eyes shut and pretend you haven’t yet woken or that you’re already dead.” On arrival Michael stays with Richie and they strike up a bond with eccentric neighbour Edward Hooper, who’s depressed by his impotence as an artist, and his intellectually sharp wife Jo, who’s given to passionate, impetuous outbreaks. Personal loss, regrets, loneliness and hazy hopes are played out against a background of sweeping change (post-war transition; the beginning of the era of American consumerism) and the powerfully painted Cape Cod setting. In an era of quick digests and speedy swiping, this novel of depth and honesty stands as a testament to the potent value of taking one’s time.

1950: late summer season on Cape Cod. Michael, a ten-year-old boy, is spending the summer with Richie and his glamorous but troubled mother. Left to their own devices, the boys meet a couple living nearby - the artists Jo and Edward Hopper - and an unlikely friendship is forged. She, volatile, passionate and often irrational, suffers bouts of obsessive sexual jealousy. He, withdrawn and unwell, depressed by his inability to work, becomes besotted by Richie's frail and beautiful Aunt Katherine who has not long to live - an infatuation he shares with young Michael. A novel of loneliness and regret, the legacy of World War II and the ever-changing concept of the American Dream.

A beautifully written novel... that confirms Hickey's status as a major talent. - Mail on Sunday, praise for Last Train to Liguria

Beautiful and heartbreaking. - Independent on Sunday, praise for Last Train to Liguria

A wonderful read - thought provoking and compelling - and, to my mind, Christine's best to date. - Irish Examiner, praise for The Lives of Women

With a beguiling grace and a deceptive simplicity, Christine Dwyer Hickey reminds us that the past is never far away - rather, it constantly surrounds us, suspends us, haunts us. This is a brilliant portrait of America as we journey with Edward Hopper and his marvellously eccentric wife, Josephine Nivision, through the years shortly after the Second World War. Two young boys, one German, one American, negotiate the ongoing perils of loss, while Hopper's wife poses searing questions, and Hopper himself attempts answers on canvas. The world, as so powerfully evoked by Christine Dwyer Hickey, is bridged by small acts of mercy and hope. - Colum McCann 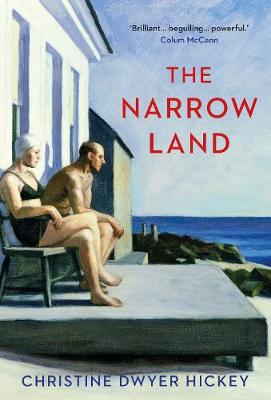 Christine Dwyer Hickey has published seven novels, one short story collection and a full length play. Cold Eye of Heaven won The Kerrygroup Irish Novel of the Year 2012 and was nominated for the International IMPAC award. Her novel Tatty was nominated for The Orange Prize and was listed as one of the 50 Irish Novels of the Decade. Last Train from Liguria was nominated for the Prix L'Europeen de Litterature. Her short stories have been published in anthologies and magazines world wide and have won several awards. The story 'Back to Bones' was longlisted for the Sunday Times EFG competition 2017. Her ...