The Alphabet of Heart's Desire

LoveReading View on The Alphabet of Heart's Desire

The Alphabet of Heart’s Desire is a beautifully written historical fiction novel loosely based on Thomas De Quincy’s early life.

English essayist Thomas de Quincy (most famous for “Confessions of an English Opium-Eater”) is the first protagonist that we meet, some years after most of the novel’s narrative takes place.

The story is told to us in alternating chapters told by Thomas, Anne and Tuah.

Thomas we are familiar with; Anne, is a young girl when we meet her. Forced by life, bad luck and circumstance into a life of prostitution.

Tuah, is a young orphaned boy when we meet him. Taken from his home by Dutch slave traders and bought onto a ship bound for the UK. Tuah is sold to the ships captain who takes him under his wing and teaches him English until they arrive in the U.K.

Thomas after a troubled early life finds himself on the streets of a London as a young man. He has no idea of how the real world operates having been bought up relatively comfortably.

You might ask what connects these characters. Well it’s not at all clear at first, but as the narrative progresses we begin to see how they are unquestionably linked.

Thomas falls upon hard times when he arrives in London, abandoned by his family, he is discovered by Anne on the street following an altercation with some men of less than desirable character. They are strangers to each other, of different worlds but drawn together by a need for companionship and laudanum … and that’s where the real story begins.

The Alphabet of Heart’s Desire is highly recommended for any historical fiction fan.

The Alphabet of Heart's Desire Synopsis

'I am nobody of consequence,' the stranger replies. 'I am only here to give you this.' He holds out his hand and in his open palm there nestles a small silver locket upon a chain. 'She asked me to return it to you, at the very end.'

A visitor calls with a gift and a message from the past...

In 1802 Thomas de Quincey, a young man from a comfortable middle-class background who would go on to become one of the most celebrated writers of his day, collapsed on Oxford Street and was discovered by a teenage prostitute who brought him back to her room and nursed him to health. It was the beginning of a relationship that would introduce Thomas to a world just below the surface of London's polite society, where pleasure was a tradeable commodity and opium could seem the only relief from poverty. Yet it is also a world where love might blossom, and goodness survive.

The lives of a street girl, an aspiring writer, and a freed slave cross and re-cross the slums of London in this novel about the birth of passion, the burden of addiction, and the consolations of literature.

This is such a great historical novel, well researched with three stories intertwined, written with thought and a little comical at times too. Full review 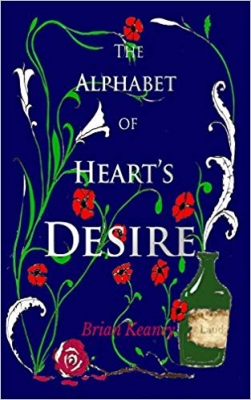 Brian Keaney is an award-winning author, best known for his young adult and children’s fantasy novels Jacob's Ladder, The Hollow People and The Magical Detectives. For a number of years he was Royal Literary Fund Fellow at Goldsmiths College and at the London College Of Fashion, and he taught creative writing on the Pembroke College Cambridge summer program. He has a house in the west of Ireland where he spends as much time as possible. His writing has been translated into twenty languages, and several of his books have now been bought by US Film Companies