The Mystery of Three Quarters

LoveReading Expert Review of The Mystery of Three Quarters

Settle down with a sirop de menthe and savour this exquisitely executed melange of mystery and thirties flair.

Cloaking herself in Christie’s Poirot mantle for the third time, bestselling crime writer Sophie Hannah here presents Hercule Poirot with something of a peculiarly personal puzzle. Our loveable hero is left feeling somewhat perplexed when an agitated middle-aged woman - “a whirlwind most fierce” – demands to know why he sent her a letter accusing her of killing a certain Barnabas Pandy. And then a second person presents themselves, demanding to know the very same thing. Mon dieu! Poirot has no idea who Pandy is, or why someone is sending these letters in his name, and so a thrillingly unpredictable mystery unfolds. The writing is elegant, suffused with the spirit of, and reverence for, Poirot’s creator, and this makes for an entertainingly satisfying experience.

The Mystery of Three Quarters Synopsis

The world's most beloved detective, Hercule Poirot - the legendary star of Agatha Christie's Murder on the Orient Express and most recently The Monogram Murders and Closed Casket-returns in a stylish, diabolically clever mystery set in 1930's London. Returning home after lunch one day, Hercule Poirot finds an angry woman waiting outside his front door. She demands to know why Poirot has sent her a letter accusing her of the murder of Barnabas Pandy, a man she has neither heard of nor ever met. Poirot has also never heard of a Barnabas Pandy, and has accused nobody of murder. Shaken, he goes inside, only to find that he has a visitor waiting for him - a man who also claims also to have received a letter from Poirot that morning, accusing him of the murder of Barnabas Pandy... Poirot wonders how many more letters of this sort have been sent in his name. Who sent them, and why? More importantly, who is Barnabas Pandy, is he dead, and, if so, was he murdered? And can Poirot find out the answers without putting more lives in danger?

What To Read After The Mystery of Three Quarters

An entertaining, and sometimes humorous, light page turner. Great for a Summer holiday. Not as good as Christie but still enjoyable.

The novel is supposed to be the typed accounts of Edward Catchpool, a police inspector of Scotland Yard. There are, however, occasions when thoughts and feelings of characters, in particular, Poirot, are given by the author, Sophie Hannah, that Catchpool was not privy to. This is something which Christie didn’t ever give us in the original books and can be quite interesting. Sometimes though I am not too sure if it should always be revealed what characters are thinking and feeling. Hannah, is excellent at giving Poirot all his necessary quirks and phrases. The plot has plenty of twists and turns to keep the reader on his or her feet. The ending is satisfactory.

A comfortable and nostalgic crime novel to savour and enjoy.

There are so many famous detectives, each with their own peculiarities, it is sometimes hard to be enthusiastic when a new one appears. Hercule Poirot is not exactly new, just resurrected by Sophie Hannah, and this is his third outing by her.

There is a whopper of a plot, very convincing, and it is of course very well written. It begins as Poirot returns home to find an angry woman waiting outside and claiming Poirot has sent her a letter accusing her of murdering a man called Barnabas Pandy. Poirot has not written the letter, nor does he know who Pandy is. The story then develops very quickly.

I found this a a crime fiction mystery with a neatly directed plot, quite complex but easy to follow, and very much in Agatha Christie's style. A comfortable and nostalgic crime novel to savour and enjoy.

A fun, clever homage to one of our greatest fictional detectives, and of course to his creator. I'm already looking forward to the next Poirot novel from Sophie Hannah!

The Mystery of Three Quarters is Hannah's third Poirot novel. Taking on the great detective must surely be a daunting task, but Hannah more than does justice to Agatha Christie's creation. She perfectly captures Poirot's essence - his mannerisms and quirks of speech. I can literally hear David Suchet's voice in my head as I read! That said, I can also see the differences - Hannah's approach is a little more comic. Instead of trying to replicate Christie -which is surely an impossible task- she puts her own spin on the characters. As with the other two novels the story is narrated by Scotland Yard Inspector Edward Catchpool, a Doctor Watson-esque figure who records Poirot's cases in writing for posterity.

True to classic crime, the country manor setting works brilliantly. The characters are all distinctive and memorable, and the plot is as twisty and unpredictable as you would expect from a Poirot novel. The clues are all there plain as day to piece together, but of course the only one who can make any sense of them is our Belgian detective. The reveal takes up a fair chunk of the book, and I shared the frustration with the suspects of wanting to know what happened, with Poirot taking centre stage and revelling in his own cleverness as he so often does.

The Mystery of Three Quarters is a fun, clever homage to one of our greatest fictional detectives, and of course to his creator. I'm looking forward to the inevitable fourth Poirot novel from the pen of Sophie Hannah!

`What Sophie and Agatha have in common is a rare talent for fiendish unpredictability. They make you see how the impossible might be possible after all.' 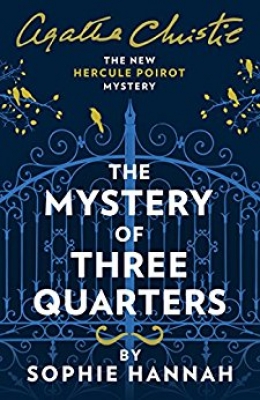 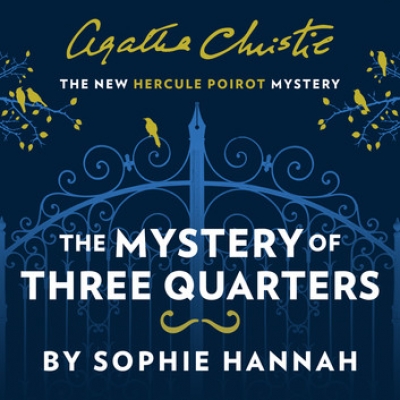 Sophie Hannah is a best-selling, award-winning poet. Her latest collection, First of the Last Chances, was chosen for the Poetry Book Society’s Next Generation promotion in June 2004. She regularly performs her poetry to live audiences nationwide and abroad, and recently won first prize in the Daphne Du Maurier Festival Short Story Competition for her psychological suspense story The Octopus Nest.  Sophie lives in West Yorkshire with her husband and two children. Click here to read an interview with Sophie Hannah about her new Poirot novel The Monogram Murders.  Click here to read an interview with Sophie ...

View All Books By Sophie Hannah