LoveReading View on A Question of Blood

An audiobook edition of the 14th Rebus novel. Read by James Macpherson.

A shooting incident at a private school just north of Edinburgh. Two seventeen-year olds killed by an ex-Army loner who has gone off the rails. As Detective Inspector John Rebus puts it, 'there's no mystery'... except the why. But this question takes Rebus into the heart of a shattered community. Ex-Army himself, Rebus becomes fascinated by the killer, and finds he is not alone. Army investigators are on the scene, and won't be shaken off. The killer had friends and enemies to spare - ranging from civic leaders to the local Goths - leaving behind a legacy of secrets and lies. Rebus has more than his share of personal problems, too. He's fresh out of hospital, hands heavily bandaged, and he won't say how it happened. Could there be a connection with a house-fire and the unfortunate death of a petty criminal who had been harrassing Rebus's colleague Siobhan Clarke? Rebus's bosses seem to think so...

A Question of Blood Press Reviews

'As usual, the story is projected with almost cinematic vividness by James Macpherson' - Independent 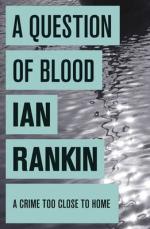