Heligoland Britain, Germany, and the Struggle for the North Sea

LoveReading View on Heligoland Britain, Germany, and the Struggle for the North Sea

Located 300 miles off the east coast of England, and 29 miles off the German coastline, Heligoland has been inhabited since prehistoric times. Following a period under Danish sovereignty, the land became Britain’s smallest colony for most of the nineteenth century. After a spell as a seaside spa for European liberals, Britain ceded the land to Germany in 1890, whereupon it was transformed into a naval base by the Kaiser and later Hitler, thereby consolidating its pivotal role in Anglo-German relations. The land was fiercely fought over in both world wars - in fact, Britain directed the largest non-nuclear explosion in history at the island in 1947. But, as the author shows through his crisply engaging style, drawing upon endlessly varied sources of archival information – literature, art, film – the island’s symbolic importance continued deep into the twentieth century. I came away with untold new insights, and the utmost admiration for the author’s nimble melding of scholarly excellence with readability. ~ Joanne Owen

Heligoland Britain, Germany, and the Struggle for the North Sea Synopsis

On 18 April 1947, British forces set off the largest non-nuclear explosion in history. The target was a small island in the North Sea, thirty miles off the German coast, which for generations had stood as a symbol of Anglo-German conflict: Heligoland. A long tradition of rivalry was to come to an end here, in the ruins of Hitler's island fortress. Pressed as to why it was not prepared to give Heligoland back, the British government declared that the island represented everything that was wrong with the Germans: 'If any tradition was worth breaking, and if any sentiment was worth changing, then the German sentiment about Heligoland was such a one'. Drawing on a wide range of archival material, Jan Ruger explores how Britain and Germany have collided and collaborated in this North Sea enclave. For much of the nineteenth century, this was Britain's smallest colony, an inconvenient and notoriously discontented outpost at the edge of Europe. Situated at the fault line between imperial and national histories, the island became a metaphor for Anglo-German rivalry once Germany acquired it in 1890. Turned into a naval stronghold under the Kaiser and again under Hitler, it was fought over in both world wars. Heavy bombardment by the Allies reduced it to ruins, until the Royal Navy re-took it in May 1945. Returned to West Germany in 1952, it became a showpiece of reconciliation, but one that continues to bear the scars of the twentieth century. Tracing this rich history of contact and conflict from the Napoleonic Wars to the Cold War, Heligoland brings to life a fascinating microcosm of the Anglo-German relationship. For generations this cliff-bound island expressed a German will to bully and battle Britain; and it mirrored a British determination to prevent Germany from establishing hegemony on the Continent. Caught in between were the Heligolanders and those involved with them: spies and smugglers, poets and painters, sailors and soldiers. Heligoland is the compelling story of a relationship which has defined modern Europe.

Heligoland Britain, Germany, and the Struggle for the North Sea Press Reviews

'Jan Ruger's new book takes the North Sea island of Heligoland as a lens through which to examine Anglo-German relations over the past two centuries. The result is an entertaining and illuminating study full of colourful detail, that traces the phases of co-operation and hostility between the two powers over the decades from the Kaiser to Hitler and beyond.' -- Richard J. Evans, author of The Pursuit of Power: Europe 1815-1914

'This is a brilliant demonstration of how the very small can have a significance over time on the very large. Drawing on literature, cartography, art, music and film, as well as a wide spread of archives, Jan Ruger shows how and why Heligoland became caught up in a succession of epic and destructive wars, conflicting but also overlapping national identities, the rise and fall of Anglo-German antagonism, and the competition for empire.' - Linda Colley, Princeton University

'A brilliant and subtle history of Anglo-German relations, told through the evocative study of a contested island. This fascinating book is a triumphant demonstration of the power of microhistory.' -- Christopher Clark, author of The Sleepwalkers: How Europe Went to War in 1914

'Visitors today may be quite unaware of Heligoland's curious history or of the weight of symbolism it once bore. Day trippers come now to enjoy the bird watching, the 1950s architecture, the duty-free cigarettes. Before setting out, they should read Mr. Ruger's fascinating book.' -- The Wall Street Journal

'A gem of a study ... concise, scholarly, and readable. On one level it is simply an authoritative narrative history of an island and ist people, but on another it represents so much more: a case study of the twists and turns of Britain's relationship with Germany, Europe, and the wider world over two tumultuous centuries.' -- Nick Hewitt, Military History Monthly

'Mr Ruger makes his case that Heligoland's fortunes are a useful bellwether of wider relations and he relates his story in an engaging style ... More people should know Heligoland's story for the echoes it has today.' -- The Economist

'Resonant... a prism through which to view the entire span of Anglo-German rivalry, conflict and, eventually, reconciliation.' -- Martin Kettle, Guardian

'The whole book is studded with unexpected gems about extraordinary people ... a fine tale.' -- Max Hastings, The Sunday Times

'Ruger's book brilliantly spins a far bigger history out of one small, half-forgotten place. For so long the fault line between two powers, Heligoland deserves to be rescued from oblivion; it has found an admirable historian.' -- Ben Wilson, The Sunday Telegraph

'A fascinating book which uses a scrap of land in the North Sea to illustrate the tumultuous relationship between Britain and Germany.' -- History Hit Podcast with Dan Snow

'This brilliant, quirky book tells the almost unknown story of the tiny North Sea German island that became an unlikely corner of the British Empire.' -- Sunday Times, Best Books for the Summer 2017

'Masterful... fascinating... this is microhistory at its best.' -- W. Mark Hamilton, Mariner's Mirror

'Ruger's book moves seamlessly between the views and demands of the inhabitants of Heligoland... and the considerations and policies impacting the island in the halls of government in Great Britain and Germany. Well-researched from multiple archives... the book also provides a useful and important reminder to historians of the need to consider a long view.' -- Alan M. Anderson, Naval Historical Foundation

'A Ruger's work on this small island is historiography at its best.' -- Dieter Langewiesche, German Historical Institute London Bulletin 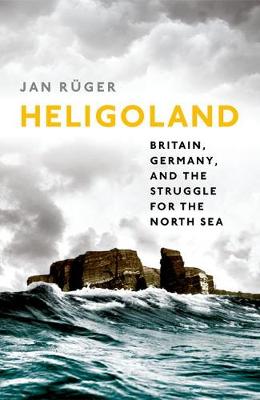 Shortlisted for the Wolfson History Prize 2018 Jan Ruger is Professor of History at Birkbeck, University of London. He is the author of The Great Naval Game: Britain and Germany in the Age of Empire and joint editor of Rewriting German History. On Heligoland: Britain, Germany and the Struggle for the North Sea: How to write the history of two nations divided but also inextricably linked by their shared past was at the heart of my interest in Heligoland. From early on I thought of this outpost in the North Sea as a prism through which to view the long ...