At once astonishingly detailed and succinctly incisive, this remarkably readable work lays bare the fascinating story of how China came to be the powerful country it presently is.

“Nationalism matters in China, and what matters in China matters to us all,” and, the author argues, China’s “new nationalism” and present-day power can be traced back to the early twentieth century, and (perhaps surprisingly) to past weaknesses - to periods of invasion and partial subjugation when , for example, parts of major cities were governed by Britons, Japanese, Germans and Russians. With a keen and engaging interweaving of cultural history, the author explores the formation, development and trajectory of outside powers within China from the post-WWI era. Naturally, high-level politics is explored with scholarly sharpness, but this places people at its heart, relating lived experiences alongside policy shifts and grapples. Truly this is narrative history at its understand-the-past-to-understand-the-present best. ~ Joanne Owen

The extraordinary and essential story of how China became the powerful country it is today.Even at the high noon of Europe's empires China managed to be one of the handful of countries not to succumb. Invaded, humiliated and looted, China nonetheless kept its sovereignty. Robert Bickers' major new book is the first to describe fully what has proved to be one of the modern era's most important stories: the long, often agonising process by which the Chinese had by the end of the 20th century regained control of their own country.Out of China uses a brilliant array of unusual, strange and vivid sources to recreate a now fantastically remote world: the corrupt, lurid modernity of pre-War Shanghai, the often tiny patches of 'extra-territorial' land controlled by European powers (one of which, unnoticed, had mostly toppled into a river), the entrepots of Hong Kong and Macao, and the myriad means, through armed threats, technology and legal chicanery, by which China was kept subservient. Today Chinese nationalism stays firmly rooted in memories of its degraded past - the quest for self-sufficiency, a determination both to assert China's standing in the world and its outstanding territorial claims, and never to be vulnerable to renewed attack. History matters deeply to Beijing's current rulers - and Out of China explains why.

'Bickers... adopts a wide lens in capturing the diversity of Sino-western interactions. Few nuances escape his eye... Out of China demolishes many favourite motifs of official history in China...Teeming with nuances while assailing the Communist party's nationalistic narrative, Bickers book is a reminder of the importance of uncovering the past's messy, contradictory truths.' -- Julian Gewirtz, Financial Times

'Eery schoolchild in China has heard of the sign at a park in colonial-era Shanghai that said: Chinese and dogs not admitted. It is often cited as the kind of foreign arrogance that shamed a great civilisation into throwing off the yoke of imperialism, a struggle well told in this new book by Robert Bickers, our pre-eminent historian of the British in China...It is a pleasure to read the fruits of his mature scholarship as he revisits familiar ground, puncturing myths and putting British and Chinese views into reciprocal perspective.' -- Michael Sheridan, The Sunday Times

'Robert Bickers is a pre-eminent chronicler of China... a great story told with splashes of colour and sharp wit' -- Jonathan Fenby, Literary Review

'This detailed account valuably reconstructs the west's recent cultural malfeasance in China, and also challenges the simple, propaganda narrative that the CCP tells about its deliverance of China from Colonial aggressors' -- Julia Lovell, Prospect 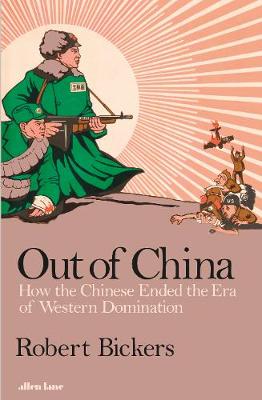 Shortlisted for the Wolfson History Prize 2018 Robert Bickers is the author of the highly-acclaimed Empire Made Me and The Scramble for China. He has written extensively on Chinese history and is a Professor of History at the University of Bristol. On Out of China: How the Chinese Ended the Era of Western Domination:  When I began undergraduate study of Mandarin Chinese in London in 1983, it was very rare to encounter anybody there who spoke the language. When I began doctoral study in the history of Sino-British relations in 1988, I was one of only three of four people beginning ...

View All Books By Robert Bickers