LoveReading View on Out of the Blue

April 2018 Debut of the Month | In a Nutshell: Falling Angels | Rising Hope | Falling in Love

Across the world angel-like Beings are falling from the sky. Their winged bodies seep golden blood on impact with the earth, and then they die. In the aftermath of the first sightings, the world exploded in an apocalyptic frenzy, yielding religious cults and angel-exploiting money-makers. Alongside this, Jaya is also dealing with a personal apocalypse – the sudden death of her mother. While Jaya struggles with her guilt-ridden grief, and with losing contact with Leah, the best friend who might also have been her girlfriend, she’s also irritated by her dad’s fanatical angel-chasing. But, as things turn out, it’s Jaya who’s there when an angel falls, and, for the first time, this angel survives. Angels don’t exist in Jaya’s mum’s Hindi religion so she pushes aside any thoughts that this is somehow a sign. But amidst the frenzy of the Edinburgh festival and the aggressive fanaticism of the Standing Fallen cult, Jaya does everything she can to protect this shimmering rose-gold Being from harm.

The angels are never explained, or fully understood, but that isn’t necessary, for this isn’t about hard scientific facts, this is about matters of the soul. It’s a charming debut, radiant with humanity and heart.

Out of the Blue Synopsis

When angels start falling from the sky, it seems like the world is ending. For most people it doesn't. But for Jaya the world ended when her mother died, two weeks before the first angel fell.Smashing down to earth at extraordinary speeds, wings bent, faces contorted, not a single one has survived and, as the world goes angel crazy, Jaya's father uproots the family to Edinburgh, intent on catching one alive. But Jaya can't stand his obsession and, struggling to make sense of her mother's sudden death and her own role on that fateful day, she's determined to stay out of it. Then something extraordinary happens: an angel lands right at Jaya's feet, and it's alive.

Set against the backdrop of the frenzied Edinburgh festival, Sophie Cameron's Out of the Blue tackles questions of grief and guilt and fear over who we really are. But it's also about love and acceptance and finding your place in this world as angels drop out of another.

Out of the Blue Reader Reviews

Jasmine, age 13 - 'One of the best books I have ever read, it had me in tears of happiness and sadness, I was hooked from the very beginning, loved it!'

Daisy Pritchard-Williams, age 13 - 'I really loved reading this book, it was gripping and I didn’t want to put it down. My favourite character was Allie because she was brave and
courageous.'

Amelie Preston, age 13 - 'Out Of The Blue is a really good book. it mixes lots of different views on the angels and includes lots of little mysteries, even if they aren't the ones you would expect. Overall I really enjoyed this book especially because it had lots of interesting characters.'

Ella O’ Gorman, age 13 - 'This book leaves a lot of unanswered questions about the angels, especially why were they falling to Earth and did they stop falling? Maybe the author will deal with these questions in a sequel. This was not my favorite book, but it was an unusual read.'

Miyah Smith, age 13 - 'The story ended with lots of unanswered questions, but I still loved this heart warming tale.'

Clíona McKeown-Bittles, age 19 - 'Out of The Blue is imaginative and fantastically written with wonderful characters. Every emotion I have was used while reading this. Brilliant.' 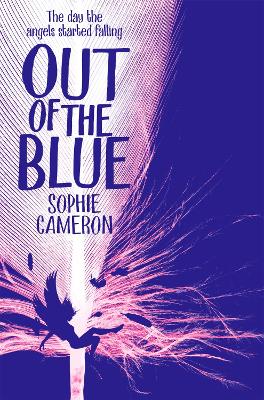 Sophie Cameron was born in the Scottish Highlands and has lived in Canada, France, Spain and Germany. She has a postgraduate certificate in Creative Writing from Newcastle University and has been shortlisted for the Bath Children's Novel Award. Her first novel, Out of the Blue, was featured in SCBWI's Undiscovered Voices 2016.

View All Books By Sophie Cameron