Auntie's War The BBC during the Second World War

Auntie's War The BBC during the Second World War Synopsis

Auntie's War is a love letter to radio. While these were the years when her sometimes bossy tones earned the BBC the nickname `Auntie', they were also a period of truly remarkable voices: Churchill's fighting speeches, de Gaulle's broadcasts from exile, J. B. Priestley, Ed Murrow, George Orwell, Richard Dimbleby and Vera Lynn. Radio offered an incomparable tool for propaganda; it was how coded messages, both political and personal, were sent across Europe, and it was a means of sending less than truthful information to the enemy. At the same time, eyewitness testimonies gave a voice to everyone, securing the BBC's reputation as reliable purveyor of the truth. Edward Stourton is a sharp-eyed, wry and affectionate companion on the BBC's wartime journey, investigating archives, diaries, letters and memoirs to examine what the BBC was and what it stood for. Full of astonishing, little-known incidents, battles with Whitehall warriors and Churchill himself, and with a cast of brilliant characters, Auntie's War is much more than a portrait of a beloved institution at a critical time. It is also a unique portrayal of the British in wartime and an incomparable insight into why we have the broadcast culture we do today.

The story of the BBC during the war has hardly been told though it is both fascinating and important.  Edward Stourton's book is an engrossing account of this important time for one of our great institutions, perhaps to be read along side Penelope Fitzgerald's brilliant novel Human Voices. -- Chris Patten, Lord Patten of Barnes 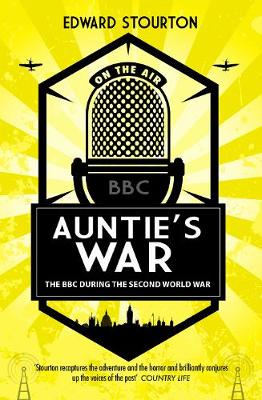 Edward Stourton is the author of six books. He is writer and presenter of several high-profile current-affairs programmes and documentaries for radio and television, and regularly presents BBC Radio Four programmes such as The World at One, The World This Weekend, Sunday and Analysis. He is a frequent contributor to the Today programme, where for ten years he was one of the main presenters.

View All Books By Edward Stourton