The Gift of Anger

LoveReading View on The Gift of Anger

From Mahatma Gandhi’s grandson a memoir that also shares some of the beliefs and teachings of his grandfather. Arun Gandhi believes that what his grandfather had to say about co-existence and tolerance is needed now more than ever. A deceptively simple book that has a powerful message about the level of inequality and unrest in the world today. ~ Sue Baker

An Autobiography: The Story of My Experiments with Truth by M K Ghandi

The Life of Mahatma Gandhi by Louis Fischer

The Gift of Anger Synopsis

This major new work of non-fiction illuminates ten vital, extraordinary life lessons taught to Arun Gandhi by his beloved grandfather, Mahatma Gandhi. Told through the author's moving, often irreverent story of his years being raised at the iconic Sevagram ashram, Arun's charming memories of his grandfather are an engaging and often surprising read. They reveal a rare insight into Gandhi the man behind the icon, but throughout are balanced with the inspirational lessons themselves. Arun believes that the violence in the world today makes Gandhi's teachings more vital than ever, and The Gift of Anger places these lessons in a modern context, shedding new light on how Gandhi's principles can - and must - be applied to today's concerns.

'Anger is good. It is an energy that compels us to define what is right and wrong' - Mahatma Gandhi, to his grandson, Arun 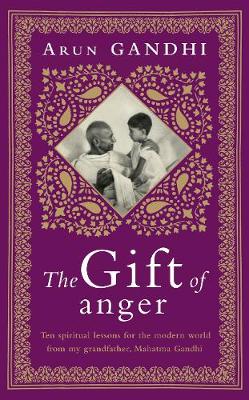 Arun Gandhi is an internationally renowned activist, speaker and grandson of Mahatma Gandhi. He founded the M.K. Gandhi Institute for Nonviolence in 1987 and spent 30 years as a journalist for The Times of India. Arun travels and speaks at up to 60 venues every year, from universities to the United Nations.

View All Books By Arun Gandhi