They are Trying to Break Your Heart

LoveReading View on They are Trying to Break Your Heart

A fascinating heart-breaking debut novel full of attitude and aching tension. Set over a decade and more, we see events unfold in the Bosnian war, and separately watch the relationship between two people ebb and flow before events converge in one unforgettable moment. At the end of the second chapter, a shiver of chills and understanding sliced through me as I began to see a vivid, striking picture emerge. David Savill writes with true compassion and unflinching honesty, his knowledge of two major events, from very different parts of the world, creates a sincere and provocative tale. Zigzagging around in time, between the three main characters, left me feeling unsettled, and a sense of foreboding hovered over the pages. ‘They Are Trying to Break Your Heart’ connects to the intimate, the personal, creating hushed stillness and reflection in a tumultuous world, what a truly captivating novel this is. ~ Liz Robinson

They are Trying to Break Your Heart Synopsis

In 1994, Marko Novak's world is torn apart by the death of his best friend. Kemal Lekic, a young soldier in the darkest days of the Bosnian war, is killed in the shelling of their home town. But his body is never recovered. After the funeral, Marko flees to England, hoping to put his broken homeland, and the part he played in the loss of his friend, behind him. In 2004, human rights researcher Anya Teal is following a tenuous lead in the hunt for a Bosnian man with blood on his hands. She is also clinging to the fragile hope that she can rebuild a relationship with her first love, William Howell. When Anya invites Will to join her on a Christmas holiday in the Thai beach resort of Kao Lak, her motives are not entirely pure. She hopes the holiday will offer them the chance to unpick the mistakes of their past, but Kao Lak may also be home to the man Anya is looking for-a man with a much darker history. What no-one can know, is that a disaster as destructive as a war is approaching, detonated in the sea-bed of the Indian Ocean. It is a disaster that will connect the fates of Marko, William and Anya, across the years and continents. In its wake, everything Marko thought he knew, will be overturned.

They are Trying to Break Your Heart Press Reviews

'Tense and powerful ... Faultless ... Savill sidesteps the easy answers or received wisdoms about the labyrinthine, internecine war ... They are Trying to Break Your Heart triumphs' Times Literary Supplement

'They Are Trying to Break Your Heart is moving, tender, thrilling, important. It will stay with me for a very long time' Megan Bradbury, author of Everyone is Watching

'A pageturner of some considerable force. David Savill writes with a profound intelligence and compassion about subjects that really matter' Nathan Filer

'A searing debut novel ... Family, love, responsibility, desire, memory, lust, death and the unspeakable - all these and more are stitched through a plot that ranges across 10 years of time, half a world, and a couple dozen characters ... Savill's is a mash-up of the international thriller and novel of ideas and it succeeds measurably in both' LA Times

'They Are Trying to Break Your Heart is a beautifully balanced and nuanced novel. Savill threads together the various strands of his story superbly to produce a novel full of the mystery and wonder of the world' Richard Skinner

'A remarkable book. They Are Trying To Break Your Heart moves with the force of a thriller, spanning decades and conjuring different continents, and their people, with ease. David Savill will break your heart, then put it back together again, page by page, in prose of aching emotional truth' Anna Hope, author of Wake

'This is the first book I've read that truly represents the political climate of the twenty-first century's first decade. Moving between Sarajevo and Thailand, this multi-layered, global novel tackles what happens in the face of unbearable trauma ... The story evokes a pointed and contemporary question: how can we dare to love, when everything around us is broken?' Julia Bell

'Whisks the reader off to the gripping heart of foreign wars and shores ... A breathtaking debut that doesn't pull its punches' Tim Samuels 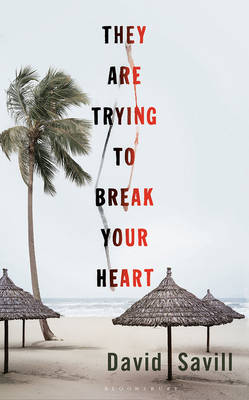 In the last year of the Bosnian war, David Savill lived as a teacher and a student among the refugees of Srebrenica, helping to organise a summer university for students in the safe-haven of Tuzla. Over the past fifteen years he has returned to Bosnia several times. Tuzla, and the real story of its 'Youth Day' massacre, became the inspiration for the fictional town of Stovnik. In an eight-year career as a BBC Current Affairs journalist, David worked on Panorama, This World, Real Story, World at One and PM. In 2004, he arrived on the beaches of Phuket two days after ...

View All Books By David Savill