Lie of the Land

LoveReading View on Lie of the Land

A fascinating and disturbing premise that has the ability to swing a profound sledgehammer into your consciousness. Set in what feels like a very possible future, Carl is isolated in a remote Scottish village and finds himself mentally as well as physically detached and confined. It takes a little while to settle in to this story, to get used to the writing style and understand the world you are in; it is worth the wait though. Chapters are grouped into a time period and at first zigzag back and forwards in time. The initial feeling of dislocation feels quite deliberate, it helps you empathise and feel a connection with the village community. There is a vulnerability to Carl, and while he isn't particularly likeable, he is an intriguing and captivating character. As time passes and Carl begins to understand his surroundings we start to hear from other villagers and they add a shot of positiveness to proceedings. This intense exploration of human instinct and glimpse into an imagined world, is ultimately an interesting and thought-provoking read.

Lie of the Land Synopsis

Investigative journalist Carl Shewan lives in a world controlled by terror. Part of a dying breed, trapped under the heel of the oppressive CivCon regime, he and his colleagues are slowly being pushed to the margins as they struggle against a government that will tolerate no challenge to its absolute authority. When an informant summons him to the Highland town of Inverlair with information on the mysterious new communications system, S.C.O.P.E, Carl thinks he might finally be onto something. Not long after he arrives, however, the system is activated ...with catastrophic results. Imprisoned in this remote refuge by a technological catastrophe for which he feels partly responsible, Carl struggles to adapt to impending fatherhood and to a harsh new existence in an ancient landscape, until a childless gamekeeper offers him an alternative to guilt and alienation. Set in the near future, Lie of the Land examines the claustrophobia of small-town life and questions how far the state will go to preserve an orderly society, one in which ubiquitous surveillance has reduced human life to a virtual experience.

Lie of the Land Reader Reviews

Lie of the Land Press Reviews

'Despite the horrors that slowly, slyly emerge, there are also passages of genuine beauty ... announces a talent to be followed closely' - Stuart Kelly

'Lie of the Land is greater than the sum of its possible parts, and those parts might be 1984, Lord of the Flies, and Under the Dome' - Shoreline of Infinity 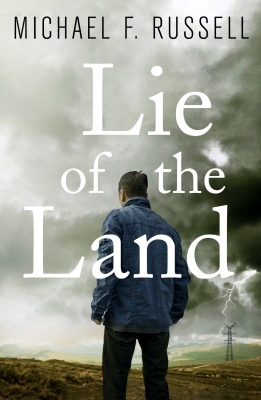 Michael F. Russell grew up on the Isle of Barra before leaving to study Social Sciences at the University of Glasgow, followed by a postgraduate diploma in Journalism Studies at the University of Strathclyde. He is deputy editor at the West Highland Free Press and writes occasionally for the Sunday Herald. His writing has appeared in Gutter, Northwords Now and Fractured West. He lives on Skye with his partner and two children. Below is a Q&A with this author 1. Do you have a favourite character in the book? I guess George, as he is doing his best ...