The Rest of Us Just Live Here

LoveReading View on The Rest of Us Just Live Here

Shortlisted for the Books Are My Bag Children's Book Award 2016.

Shortlisted for the CILIP Carnegie Medal 2016.

Daring, beautifully written, full of ideas that will bring the reader up short, The Rest of Us Just Live Here is a dystopian adventure that mocks dystopian adventures while acknowledging the genre’s power to reveal truths, particularly about teenage lives. As one band of teenagers – those special ‘indie kids’ familiar from so many YA novels – battle to save the world from the Immortals, the main plot of the novel concerns another group of young people. Mikey is getting through his teenage years with the help of his friends and by focusing on graduating and leaving home.  He also wants to declare his love for his friend Henna. It’s enough for anyone to cope with, the possibility of someone blowing up school only adds to his problems.  The indie kids’ story is told entirely in chapter head summaries, the real drama is Mikey’s, and of course his story means the most to the rest of us. Original, funny, true, it can only be Patrick Ness.

The Rest of Us Just Live Here Synopsis

Award-winning writer Patrick Ness's bold and irreverent novel powerfully asks what if you weren't the Chosen One? The one who's supposed to fight the zombies, or the soul-eating ghosts, or whatever this new thing is, with the blue lights and the death? What if you were like Mikey? Who just wants to graduate and go to prom and maybe finally work up the courage to ask Henna out before someone goes and blows up the high school. Again. Because sometimes there are problems bigger than this week's end of the world and sometimes you just have to find the extraordinary in your ordinary life. Even if your best friend might just be the God of mountain lions...An exceptional novel from the author praised by John Green as an insanely beautiful writer .

The Rest of Us Just Live Here Reader Reviews 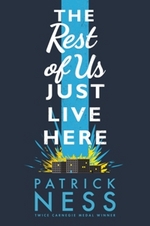