Robert Crais is one of the very best of today’s crime writers and The Two Minute Rule will grip and intrigue those familiar with him and provide the perfect opportunity for new readers to discover the author who sets the standard when it comes to twisting plots and powerful characters. This title is also available as an Audiobook, in CD format. Click here to find out about Robert Crais' new book, The Watchman.

But not everyone plays by the rules. When an aging ex-con finally gets out of jail, freedom doesn't taste too sweet. His son is gunned down in a drive-by shooting. It seems like a random crime, but when the victim is a cop - especially a cop with a con for a father - the motives are never simple.

When the hit is exposed as a revenge killing, and the question of police corruption is raised, it becomes a father's last duty to clear his son's name and catch the killer.

"[Crais is] always worth reading. The Two Minute Rule gets off to a rousing start... Crais's thrilling narrative oozes suspense. There are twists to keep you guessing."
Peter Guttridge
THE OBSERVER

"Absorbing... excellent on several levels. Holman is movingly portrayed... Crais is a master of dialogue; the plot is full of surprises. I urge fans who might be put off by the absence of Elvis Cole to read it. They won't be disappointed."
Marcel Berlins
THE TIMES

"It opens like a champagne cork popping and never lets up after that. [A] dark, romantic thriller. A nerve-racking, switchbacking tale of guilt and redemption. It's so good it gives you goose bumps."
Mark Sanderson
THE EVENING STANDARD

"Robert Crais is one of the best American crime novelists and his new book is as cleverly plotted as ever. It's slick, fast-moving entertainment."
Susanna Yager
THE SUNDAY TELEGRAPH 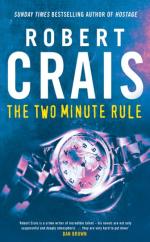