The Belly of the Atlantic

LoveReading View on The Belly of the Atlantic

Salie, the narrator of this story, is a Senegalese woman now living in France. Her little half-brother, MadickÃ© dreams of joining her there. He believes, like many of his Senagalese brothers, that the route to France is via football. In his frequent phone calls to Salie he begs her that if she can only get the fare to him he can get a trial with a French team and become rich and famous. Salie despairs. She knows the truth about life as an immigrant and urges MadickÃ© not to believe the mendacious stories of returnees like the â€œman from BarbÃ¨sâ€ and others.

Salie was an outsider on the little Senegalese island of Niodior because she was illegitimate. She left to marry, got divorced, and now feels that she belongs nowhere. Home is neither France nor Senegal and she tries to convey this to MadickÃ©, in terms he will understand. She explains to him that even the most successful Ã©migrÃ© footballers are subjected to racist taunts and abuse. But MadickÃ© doesnâ€™t believe her and assumes that she must be rich and comfortable if sheâ€™s living in Europe. (The recent riots involving young immigrants in the Paris Banlieu and the Zidane â€œincidentâ€ in the 2006 World Cup are testimony to Salieâ€™s warnings).

This is an incredibly rich book in which Fatou Diome manages in a mere 182 pages to convey an incredible amount of information. She tackles immigration, modern life in French west Africa, feminism, politics, economics and polygamy, the scourge of African society, a practice that, she believes, prevents progress. She writes:

â€œIf only men would stop measuring their virility in the number of children they produce. You donâ€™t need a maths degree to grasp that the more people there are the less bread here is for each person.â€

This isnâ€™t to say that the book is simply worthy. It is full of amazing characters, and while it may suffer a little from the translation, it is written with wonderful poetic description and wry humour.

The Belly of the Atlantic Synopsis

Salie lives in Paris. Back home on the Senegalese Island of Niodior, her football-crazy brother, MadickÃ©, counts on her to get him to France, the promised land where foreign footballers become world famous. Given his illusions, how can Salie explain to him the grim reality of life as an immigrant?

The story of Salie and MadickÃ© highlights the painful situation of those who emigrate. Others who feel this pain include NdÃ©tare, the Marxist schoolteacher and football coach, exiled to Niodior by the government but never accepted by those born there. Then there's SankÃ©le, his former lover, the legendary beauty, whose only way out of an arranged marriage ends in tragedy. And poor Moussa, whose dreams look set to come true when he's scouted by a big French football club, but which fall apart when he doesn't make the team.

Fatou Diome's assured first novel looks with humour and empathy at the different destinies of those on either side of the divide of exile.

The Belly of the Atlantic Press Reviews

â€˜This charming, vivid and poetic book captures the poignancy of immigrant life and all the unresolved pain of Africaâ€™s relationship with its former colonial powersâ€™ â€“ Michela Wrong

â€˜In her memorable novel Diome confronts the refractions of post-colonialism with a rare vigour, combining a lacerating intelligence with the warm heart of a poetâ€™  - Alison Fell 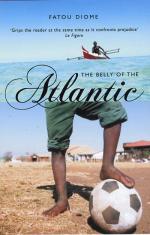 Born in 1968 in Niodior, Senegal, Fatou Diome moved to Strasbourg in 1994. She has taught at Strasbourg University and currently presents a cultural programme on the television station FR3. She is the author of a collection of Short Stories called La PrÃ©fÃ©rence Nationale.

View All Books By Fatou Diome