The Girl Who Wasn't There

The Girl Who Wasn't There Synopsis

Sebastian von Eschburg, scion of a wealthy, self-destructive family, survived his disastrous childhood to become a celebrated if controversial artist. He casts a provocative shadow over the Berlin scene; his disturbing photographs and installations show that truth and reality are two distinct things. When Sebastian is accused of murdering a young woman and the police investigation takes a sinister turn, seasoned lawyer Konrad Biegler agrees to represent him - and hopes to help himself in the process. But Biegler soon learns that nothing about the case, or the suspect, is what it appears. The new thriller from the acclaimed author of The Collini Case, THE GIRL WHO WASN'T THERE is dark, ingenious and irresistibly gripping.

The Girl Who Wasn't There Press Reviews

'We have, in Von Schirach's ice-cool, effortlessly classy prose, an antihero accused of murder, who sees the world in too-vivid colour, and his bumptious defence lawyer, who sees everything in shades of grey. It makes for a disconcerting mix of build-up and anticlimax, tension and humour, lies and truth, and a novel as intriguingly eccentric as its protagonist' Observer

'Written in a beautifully understated style that matches his protagonists
detached and rather abstract view of life ... It's an examination of the disconnection between truth and reality that is tantalising and disturbing in equal measure' -- Laura Wilson, Guardian

'Ferdinand von Schirach is one of Europe's most celebrated crime authors ... Well worth reading ... This is a sophisticated novel about a man whose emotional detachment is as chilly as it is destructive' -- Joan Smith, Sunday Times

,Ferdinand von Schirach's prose is elegant and unemotional ... gripping and the story is intriguing and often disturbing, -- Marcel Berlins The Times

,This centaur of a story, half-study of the alienated artist with a traumatic past and half-portrait of the lawyer as cantankerous philosopher of truth, may baffle or frustrate crime buffs. Other readers will enjoy its free and quizzical approach to genre expectations - and the swift, clean, enigmatic prose that Anthea Bell translates with her flawless grace, -- Boyd Tonkin, Independent 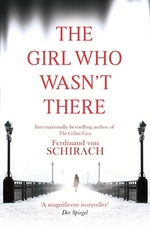 Ferdinand von Schirach was born in Munich in 1964. Today he works in Berlin and is one of Germany's most prominent defence lawyers. His short story collections Crime and Guilt and novels The Collini Case and The Girl Who Wasn't There were instant bestsellers in Germany, and his work has been translated into over thirty languages. Film adaptations of his stories are under way.