A Dandy in Aspic

LoveReading View on A Dandy in Aspic

A most welcome reissue of an important and until now forgotten Cold War spy classic that first appeared in 1966 (and was actually filmed with Laurence Harvey in the title role...). Featuring an enlightening introduction by Tom Stoppard, with whom the late Derek Marlowe shared a flat as he was writing the book, this is the fast-moving tale of Eberlin, a faceless civil servant who is also a double agent, and something of a fancy dresser to alleviate the apparent dullness of his life. The call comes to eliminate a ferocious Russian agent responsible for the assassination of many British agents. There is only one problem: the man he is assigned to eliminate is no other but himself! How Eberling navigates the treacherous mission is both a delight and gripping. Like John Le Carre on acid! ~ Maxim Jakubowski

A Dandy in Aspic Synopsis

Alexander Eberlin is a small, faceless civil servant working for the Government at the height of the Cold War. As he nears middle age, he allows himself one luxury - to dress like a Dandy. His superiors send him on a mission to hunt down and destroy a cold-blooded and vicious Russian assassin named Krasnevin, who is responsible for a number of British agents' deaths. But Eberlin has a secret - he is Krasnevin. This is the story of what happens when Eberlin is sent to destroy himself.

A Dandy in Aspic Press Reviews

'A classic of the cold war spy stories - one of the earliest and one of the best. Marlowe's Eberlin/Krasnevin is on the run from himself on different levels and in different places: the evocations of London and Berlin in the 1960s are superb.'
Piers Paul Read 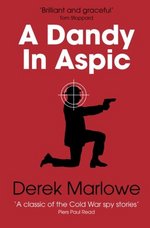 Derek Marlowe was born in London in 1938. He was a novelist, playwright and screen writer. A Dandy in Aspic, his first novel, was originally published in 1966 and became an international bestseller. It was translated into 15 languages and Marlowe himself adapted the book into a film starring Laurence Harvey and Mia Farrow. He was the author of eight further novels, including The Disappearance, which became a film starring Donald Sutherland. Marlowe had one son, Ben, and died in 1996 at the age of fifty-eight.

View All Books By Derek Marlowe